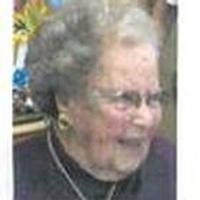 Wylda graduated from Campbell High School and went on to Hasting College for one year. She taught school four years in Franklin County, and one year in Kearney County. She married Howard F. Woodrick on June 5, 1937, at Kearney, Nebraska, and to this union two sons were born - Douglas and Duke. They moved to California, where Howard owned and operated one of the first Radio and Television shops in California. Wylda work along side of her husband. They were able to meet many of the celebrities of the day. She was also employed for many years at the Santa Monica school cafeteria and was a den mother for Cub Scouts. Howard and Wylda enjoyed dancing and playing cards over their life-time. She was always a happy and cheerful person and enjoyed having family and friends stop and visit.

Wylda was preceded in death by her parents; her husband, Howard on July 20, 1995; and all of her siblings.

She leaves to mourn her death- two sons - Douglas Woodrick, of Decatur, Illinois, and Duke and wife, Marjie Woodrick of Henderson, Nevada; one granddaughter - Stephanie; one great-grandchildren - Kaylee; and a host of other relatives and friends.

Graveside services for Wylda L. Woodrick, will be (was) Thursday, September 25, 2014, at 3:30 p.m. at the Minden Cemetery, Minden, Nebraska, with Pastor Herman Keen officiating. Interment followed in the cemetery following services. At Wylda's request the casket will be closed at the funeral home, but friends are encourage to stop and sign the register book on Wednesday, September 24, 2014, from 9 am -5 pm. The family suggests memorials to the Franklin Senior Center, in care of the Funeral Home. Online condolences may be left at www.hutchinsfuneralhome.com. Hutchins Funeral Home, 1402 M Street, Franklin, Nebraska 68939, was in charge of arrangements.

To order memorial trees or send flowers to the family in memory of Wylda Woodrick, please visit our flower store.