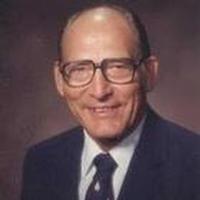 Born June 19, 1914 to William and Virginia (Young) Doering, William (Bill) grew up in Belfield, North Dakota, with his older brothers Herbert and Harwood and graduated from Belfield High School in 1932.

Bill graduated from Dickinson State Teacher's College with a B.A. degree in 1936. In 1985, Bill was inducted into the Dickinson State College Athletic Hall of Fame for athletic achievement 1930's.

Selected from the small colleges as a Little All-American during the Depression years, Bill was drafted by the Chicago Bears. When he was told the franchise paid only $25 per game, Bill decided to stay in the field of education and become a science teacher.

It was as an educator in Sentinel Butte, North Dakota that he met Anne Burhans, and the couple was married on June 8, 1937 in Glendive, Montana. The Doerings had three children, Polly, Peggy and David.

At the end of the war, Wendell's family doctor encouraged Bill to enter the field of medicine. Because Idaho had no medical school, but had reciprocity with Nebraska, Bill and his family moved to Omaha. He graduated from the University of Nebraska College of Medicine in May, 1949, and spent a year of internship at Methodist Hospital in Omaha.

Preferring the medical career of a small town and rural area doctor, the Doering family moved to Franklin, Nebraska in early July, 1950, when Bill joined the practice of Dr. David Rosenberg.

In March, 1998, the Franklin County Memorial Hospital Board of Trustees honored Bill for 48 years of service to the sick and injured of the County.

When he found time, Bill enjoyed hunting, fishing, boating, golfing, Nebraska football, and his dog, Bart. His other interests included being a Master Mason for over 60 years. He was the Jordan Medal recipient of Franklin Masonic Lodge. He also belonged to the Tehama Shrine in Hastings, Nebraska. During the past few years, Bill and David spent time with a friend's horses. Bill loved to brush and talk to them.

Bill was preceded in death by his parents, brothers, wife, and son-in-law Gil Feis. Left to cherish his full life are his daughters, Polly Feis of Lincoln, Nebraska, Peggy and husband Reynold McMeen of Broken Bow, Nebraska, and son, David Doering of Franklin, Nebraska, five grandchildren, Mary Anne Karczewski, William B. Feis, Stephanie A. Holcomb, Jeffrey R. McMeen and Jeremy W. McMeen, 13 great grandchildren, and many other relatives and friends.

In lieu of flowers, the family requests that donations go to a person or place of your choosing in Bill's name.

To order memorial trees or send flowers to the family in memory of Willliam M.D., please visit our flower store.