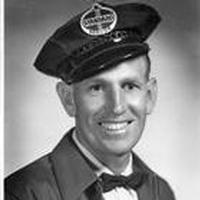 Wilbert C. Zade was born on January 28th, 1919, at Reamsville, Smith County, Kansas. He was the second to the youngest of eight- five boys and three girls of Louis Ameal and Anna May (Minnick) Zade. Wilbert died Thursday, June 21, 2007, at the Franklin County Nursing Home, Franklin, Nebraska, at the age of 88 years, 4 months, and 23 days.

On November 28, 1941, he was united in marriage to Norma Stratton in Smith Center, Kansas. They resided in Red Cloud until 1955, when they moved to Franklin. They had five children - Charles, Jerold (Bud), Nick, Louanna, and Wilberta (Bert).

Wilbert hauled cattle and freight back and forth to Omaha. He operated a service station in Red Cloud and Alma, until he joined Standard Oil Company and owned a tank wagon truck until he retired. He spent his retirement fishing and hunting with his family and all his grandchildren.

Wilbert was preceded in death by his parents; three brothers; and three sisters; and a loving wife, Norma who died in 2001.

A celebration of life service for Wilbert C. Zade was held Tuesday, June 26, 2007, at 10:00 a.m., at the Hutchins Funeral Chapel, Franklin, Nebraska, with Pastor David Johnson officiating. Music was provided by Eunice Adam, oraginsit, and Van Bradley, sang, "Old Rugged Cross" and "Shall We Gather At the River." Casket bearers were: Shawn Johnson, Lance Johnson, Chad Johnson, Jim Zade, Jerry Zade, Darren Lukas, Dustin Zade, and Zackery Zade. Interment was in the Thornburg Cemetery, rural Smith County, Kansas. The family suggest memorial donations in Wilbert name be made to the Franklin County Nursing Home in care of the family. Hutchins Funeral Home, Franklin, Nebraska, was in charge of arrangements.

To order memorial trees or send flowers to the family in memory of Wilbert Zade, please visit our flower store.