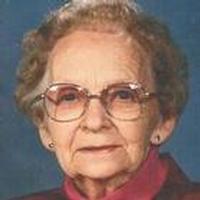 Vivian Marie (DeRiese) Decker passed away on March 3rd 2012 at the age of 96 at Good Samaritan Village in Spokane Washington. Vivian was born to Christopher and Jessie (Strangman) DeRiese on January 13, 1916 at the farm north of Bloomington Nebraska.

On February 17th 1940 she was united in marriage to Randolph Decker and to this union one son was born, Ronald Decker.

Ran and Viv lived their entire wedded life together in Franklin Nebraska with the exception of the time Ran spent in the service in World War II. She accompanied Ran to his duty station in Pocatello Idaho until he was deployed overseas.

Vivian was employed in many different offices at the Franklin County Courthouse, beginning in the Welfare office, then the County Clerk's office and from about 1961 to 1974 in the County Treasurers office. She also was the secretary for the Franklin Mutual Life Insurance Company and in the 1980's she worked part-time at Hutchins Funeral Home.

Vivian enjoyed china painting and participated in this hobby for many years in Franklin. She also enjoyed crocheting making many beautiful afghans, doilies and other household items. She loved to cook and made the best cinnamon rolls and chocolate cream pie ever.

She was preceded in death by her parents, her husband, her sister Ilene (DeRiese) Fisher and brother-in-law Jack Fisher, three nephews and two nieces.

She is survived by her son Ronald and daughter-in-law Marian, grandson Ryan and his wife Megan, granddaughter Randee and two great-grandson's Owen and Noah Decker. All are from Spokane Washington.

A Memorial Service will be held at the Franklin United Methodist Church on Monday March 26th 2012 at 10:30am with the Rev. Nancy Leonard officiating.

Burial will be in the Greenwood Cemetery in Franklin Nebraska.

Memorials may be sent in memory of Vivian to the United Methodist Church in Franklin.

To order memorial trees or send flowers to the family in memory of Vivian Decker, please visit our flower store.