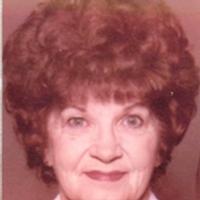 Virginia Byrum Goedeken of Franklin, Nebraska, was born on September 19, 1915, at Newton, Jasper County, Iowa, to Albert Hoyt and Bessie Almeda (Sheets) Byrum. She was the first of four children born to this marriage. Virginia passed away Wednesday, January 21, 2015, at Franklin County Memorial Hospital, Franklin, Nebraska at the age of 99 years, 4 months, and 2 days.

On April 29, 1934, Virginia married Edwin Goedeken in the home of her mother at Bloomington, Nebraska. Edwin and Virginia began their married life on a farm overlooking the Turkey Creek Valley north of Naponee. This was their home for over fifty years, until they moved to Franklin, Nebraska, in the fall of 1986. Two sons were born to this union, Gary and John.

Online condolences may be left at www.hutchinsfh.com. Hutchins Funeral Home, 1401 M Street, Franklin, Nebraska, was in charge of arrangements.

To order memorial trees or send flowers to the family in memory of Virginia Goedeken, please visit our flower store.