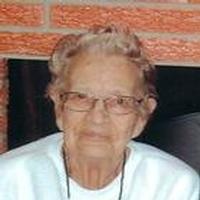 She was born January 30, 1927, in Riverton, Nebraska. Virdeena was the only daughter of Benjamin and Eva (Goebel) Hawkins. She grew up in the RIverton area and received her education at Riverton Public School.

Virdeena married Joe Richter in 1947 and later they were divorced. She married Guy Schriner in 1951. She was the mother of seven children.

Virdeena was preceded in death by her husband - Guy; two sons - Ben and Sam; and two grandchildren - Julia and Robert.

Memorial graveside service will be at Riverton Cemetery, Riverton, Nebraska, Wednesday, November 5, 2014, at 11:00 a.m., with Pastor Kasey Loschen officiating. Inurnment will follow the service in the cemetery. The family suggests memorials to the Franklin Senior Center in memory of Verdeena E. Schriner.

Hutchins Funeral Home, 1402 M. Street, Franklin, Nebraska, was in charge of arrangements. Online condolences may be left at www.hutchinsfh.com.

To order memorial trees or send flowers to the family in memory of Virdeena Schriner, please visit our flower store.