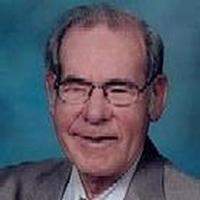 Victor Chisholm passed away from this life on Friday, March 25, 2011 at Hutchinson Care Center, Hutchinson, Kansas at the age of 77. He was born November 30, 1933 in Bloomington, Nebraska to Clifford and Hazel Wilson Chisholm.

He attended school through the 8th Grade at the Sunny Hill Rural School. He left school and worked for Nebraska Rural Electric. He married Kathleen Huebert. This union later dissolved. He entered the Navy in 1951 serving on the USS Kaskaskia, tending to the boilers.

He was honorably discharged from the Navy in 1954 and went to journeymen school receiving his GED as well as his lineman certificate, while he worked for Commonwealth Electric of Lincoln, Nebraska and ABC Electric. He farmed for several years while working as a electrician. He enjoyed traveling with his work where he was foreman on the many projects of wiring the Offutt Air Force Base, the turnpike between Omaha and Iowa, and many nuclear power plants.

He retired in 1996 and returned to Franklin, where he married his childhood sweetheart Marilyn Kugler Erickson on February 14, 1997 at the Bloomington United Methodist Church. Their wedding was the last wedding conducted at that church. He was a member of the IBEW Union, and the Post #145 American Legion.

He was preceded in death by his parents, brothers Vaughn and wife Delna, Verlon and wife Ruth, and Jerry Vincent Chisholm.

Funeral services will be at 2:00PM, Thursday, March 31, 2011 at Hutchins Funeral Home with Rev. Nancy Leonard officiating. Visitation will be from 9AM to 5PM Tuesday and 9AM to 8PM Wednesday at Hutchins Funeral Home. Burial will be in Greenwood Cemetery with the United States Navy Honor Guard. The family suggests memorials to the Victor Chisholm Memorial Fund.

To order memorial trees or send flowers to the family in memory of Victor Chisholm, please visit our flower store.