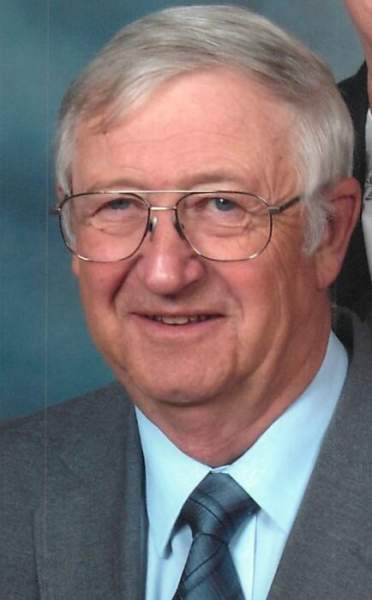 Because of his commitment to the community, the family requests instead of flowers, please give a memorial that will go to Franklin's EMT's to be used towards the purchase of a new blood pressure/defibrillator machine. Memorials may also be made to the Franklin Methodist Church.\

Vernon Fred Duncan, born June 28, 1942 in Minden, Nebraska, was the oldest of ﬁve children born to Eldon (Ike) and Willa Maxine (Podewitz) Duncan . He passed away July 29, 2021 at the age of 79 at Kearney Good Samaritan Hospital as a result of complications from COVID-19.

Vernon grew up on a farm between Naponee and Bloomington, Nebraska until 1957 when the family moved to Minden. He graduated from Minden High school in 1960, attended Kearney State College and obtained his Juris Doctorate from the University of Nebraska College of Law in 1966.

He married Karen Stratman, his high school prom date, on June 27, 1964.  To this union were born James Vernon and Elizabeth Ann.

Vern and Karen made their home in Franklin, Nebraska where Vern practiced law, ﬁrst with H.B. Long, then with his brother, Patrick for 47 years, expanding the practice to include additional partners and offices in Alma, Hildreth and Oxford before retiring in 2013.  He was elected County Attorney in 1966 and served several terms.  He  served as Franklin City Attorney for many years, as well as city and village attorney for several of the surrounding towns.

As a true country lawyer, Vern was deeply committed to his church and community; generously donating his skills and time to many organizations.  Within his church, he was a high school and adult Sunday school teacher, a member of the Sunday Niters church group, served on numerous church committees, was a lay minister and served the Nebraska United Methodist Annual Conference for many years.   He was a member of the Nebraska State Bar Association and served several appointed bar committee assignments.  Prior to his passing he enjoyed membership, and often leadership roles in the  Masons and Eastern Star,  Franklin School Board, City Council,  Chamber of Commerce, Valley Gun Club, Jaycees, Lions Club, Rotary, 4-H programs, Young Guns Trap Team, Boy Scouts and Quail Forever.  He was an original co-chair of the Franklin Canoe Race Association and back in the day was even an announcer for the Franklin Sunday night stockcar races.  He was a founding member of the Franklin County Community Foundation and the Franklin County Veterans Memorial.  Vern was one of the original certified Franklin EMT’s and served as an EMT for 35 years and a volunteer fireman for 23 years.  Vern was a Hunter Education instructor for many years and very much enjoyed teaching young people about shooting sports, hunting, fishing and enjoying the great outdoors.

Vernon always managed to ﬁnd time to go to his children’s and grandchildren’s activities and to have time in the country to hunt, ﬁsh and commune with nature.

In retirement, he enjoyed his coﬀee group, traveling to go ﬁshing in South Dakota, a cruise to Alaska, crosswords and solitaire on his iPad while sitting on the front porch, just enjoying fresh air and “not having a damned thing to do”.

Vernon is survived by his wife, Karen, son James (Jim) and wife Cynthia of Broken Bow, daughter Elizabeth (Beth) of Lincoln, grandchildren Taylor and special friend Jordan Germer of Wayne, Nebraska and grandson Samuel of Broken Bow. He is also survived by brother Patrick (Carol) Duncan  in Lincoln,  sister Debra (Keith) Twehous of Montrose, Colo and brother William (Bill) (Laurie) Duncan of Kearney. Also survived by brother in law, Max Stratman of Minden, his many nieces, nephews, great nieces and great nephews and cousins who also cherish their memories of him.

Vernon was preceded in death by his parents, Ike and Maxine, his brother Doug, sister in law Jerrylynn and his in-laws Rudy and Illene Stratman.

Because of his deep commitment to the community, the family requests in lieu of ﬂowers, memorials will go to Franklin EMT’s to be used towards the purchase of a new blood pressure machine/deﬁbrillator machine. Memorials may also go to the Franklin United Methodist Church or donor’s choice.

To order memorial trees or send flowers to the family in memory of Vernon Duncan, please visit our flower store.