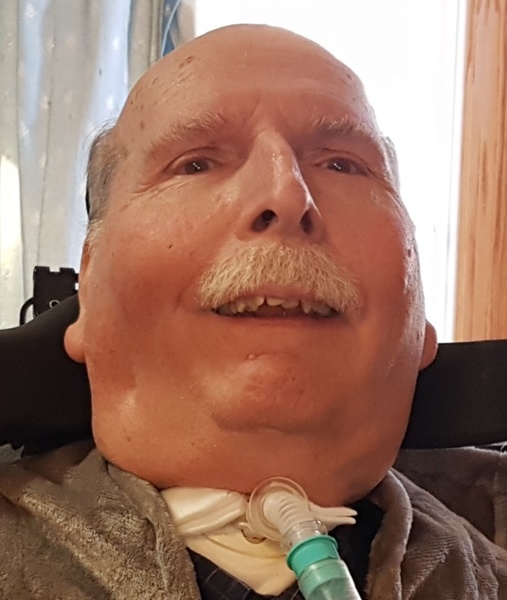 Services Tuesday will be streaming live on Hutchins Facebook Page.

Timothy Lee Kolb passed away on May 1, 2021 at the Madonna Rehabilitation Hospital in Lincoln, Nebraska. He was 74 years old. Tim was born at the Kearney County Hospital in Minden, Nebraska on January 1, 1947. He was the first of two sons born to Frederick (Freddie) and Minnie (Janssen) Kolb. As an infant, a decline in Tim’s physical development was noted. At eight months of age, a doctor told his parents that he would not live beyond the age of one. Determined to prove the doctor wrong, Freddie and Minnie took Tim home and raised him as an ordinary child. Although the physical decline continued and eventually led to quadriplegia, Tim defied the odds as he would continue to do throughout his life. It wasn’t until adulthood that Tim was finally correctly diagnosed with a rare condition called Werdnig-Hoffmann disease.

Tim attended grade school and high school in Franklin, Nebraska in a multi-story building with many of the classrooms located on upper floors. Tim and his wheelchair were carried up and down the stairs each day for classes by his loving parents who were determined that he would attend public school and have a normal childhood. They were assisted by the school’s janitorial staff, teachers and fellow students. After Tim graduated high school in 1965, he and his family moved to Kearney so that he could attend Kearney State College. He graduated in May of 1971 with a bachelor’s degree in physics and mathematics. He student taught at Kearney High School.

After college, the family moved back to Franklin. Although he was unable to work full time, he was a frequent substitute teacher at Franklin High School. He also tutored countless Franklin area students throughout his life. Tim loved to teach.

As Tim faced his own issues surrounding accessibility for the disabled by employers, Tim became involved in advocating for disability rights. This would be the start of his decade’s long advocacy for people with disabilities. Through his lobbying efforts, he was able to positively influence several pieces of legislation that advanced access and independence for the disabled. In 1995 Tim was admitted to the University Medical Center in Omaha after experiencing several bouts of pneumonia. Upon release, he was sent to Madonna Rehabilitation in Lincoln to recover. When Tim felt he was ready to return home to Franklin, the Nebraska Department of Health and Human Services denied his request. Tim learned that the grounds for the refusal were the Nurse Practice Act which happened to be up before the Nebraska Legislature for modification. Tim began going to the Capitol and speaking with Senators on the Health and Human Services Committee to amend the Act to allow people with disabilities to direct their own care. After months of lobbying, Tim was successful and the amendment passed. Tim was allowed to go home after hiring several care aides and countless other people with disabilities in the state of Nebraska were given the opportunity to live at home and direct their own care. The amendment is still known today as “The Tim Kolb Amendment.” Tim’s fierce determination and tenacity along with the skillful and loving care provided by his many care aides over the years allowed him to live independently at home for most of his life rather than in a care facility.

Tim married the love of his life, Karen (Adam) Kolb on July 18, 1998. They made their home in Franklin, Nebraska.

Tim dedicated his life to advocacy; he was the CEO and Executive Director of the Kolb Foundation for Disability Education (KFDE) in Franklin, Nebraska. He also served as the President of the Board of Directors at Independence Rising, the Center for Independent Living of Central Nebraska in Grand Island and was a member of the Community Advisory Board (CAB) of the Monroe-Meyer Institute in Omaha. He was a member of the Nebraska Consortium for Citizens with Disabilities (NCCD). Over the years, Tim served on additional disability-based organizations in the state including the Nebraska Statewide Independent Living Council (NESILC), the Association of Community Professionals (ACP), the State Rehabilitation Council (SRC), Nebraska Advocacy Services (now called Disability Rights Nebraska), the Assistive Technology Partnership’s Advisory Council, Nebraska Developmental Disabilities Council, Vocational Rehabilitation, Nebraska Consortium for Citizens with Disabilities, The ARC of Nebraska and the League of Human Dignity.

Faith in God played a central role in Tim’s life. He shared his faith with others providing comfort and counsel with so many throughout his life. His steadfast faith provided him the strength to endure the many challenges he faced. He attended church regularly and sang in the choir in his younger years. He also taught youth and adult Sunday school. Tim was truly a good and faithful servant.

Tim’s hobbies and interests included astronomy, painting (in his younger years), Ham radio operation and a general interest in all the sciences. As computer technology advanced, Tim was able to operate his own PC using voice recognition software.

Those left to cherish his memory are his wife, Karen Kolb. His brother and best friend, Chris Kolb of Lincoln; sister-in-law Kelly Kolb of Lincoln; sister-in-law Susan Hauver and husband Richard of Franklin; Brother-in-law Ben Adam and wife Katie of Kearney; nieces: Hannah Adam and Ashlee Hauver; nephews: Ryan Adam, Hayden Adam and Robert Hauver; his very special mother-in-law Laura Adam; and dearest cousins Carole and George Stephens of Omaha and Joan Bohrer of Red Could. Tim was preceded in death by his parents, Freddie and Minnie Kolb and his father-in-law, Wilbur Adam.

In honor of Tim’s life’s work and the amazing care he received in his final months, memorials are suggested to Madonna Rehabilitation Hospital, The Kolb Foundation for Disability Education or the family for a later designation.

Funeral services will be held 1:00pm Tuesday, May 4th, 2021 at Grace Lutheran Church, Franklin, Nebraska with The Reverend David Hutson, officiating. Tim will be laid to rest by his father in Greenwood Cemetery, Franklin. The casket will remain closed, friends may sign Tim’s book 9:00am to 5:00pm Monday at Hutchins funeral home who assisted the Kolb family with these arrangements.

To order memorial trees or send flowers to the family in memory of Tim Kolb, please visit our flower store.