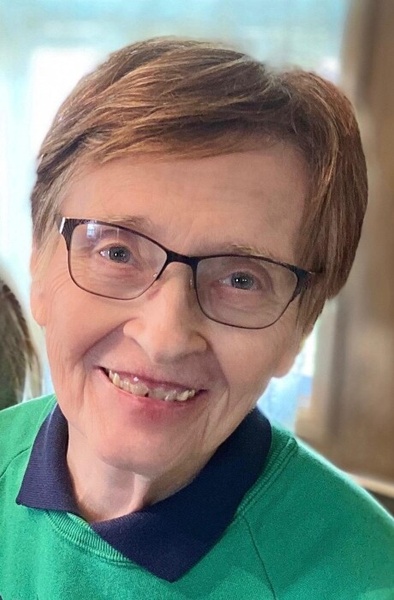 WE WOULD LIKE TO ANNOUNCE TO THE PUBLIC THAT SONDRA'S FUNERAL SERVICE WILL BE STREAMED LIVE ON THE CHURCH'S FACE BOOK PAGE. WE THANK PASTOR KASEY AND THOSE WHO ARE MAKING THIS POSSIBLE.

Due to the recent virus related DHM, we encourage our families and friends to wear facial coverings and practice social distancing during the visitation and funeral gatherings. We wish you and your loved ones to be safe during these perilous times. Masks or Facial Coverings Are Required At The Funeral Home.

The burial will be at 3:00pm Tuesday, December 8th at Greenwood Cemetery for those who feel more comfortable joining the family at graveside rather than the church.

MEMORIALS:  In honor of Sondra memorials are encouraged to be given to UNUSUAL SOLDIERS/Caleb Bislow c/o Hutchins Funeral Home.

Sondra Ann Bose, 79, passed away at her home in Franklin, NE on December 3, 2020, after a year and half battle of Lewy Body Dementia and Parkinson’s disease.   She was surrounded by her family when she left this earthly world and jumped into the arms of her Lord and Savior.  Sondra lived a life of loving God, family and friends! She was a one-of-a-kind mother, wife, grandma, sister, aunt, neighbor, co-worker and friend.

Sondra was born into a small family March 2, 1941 to mother, Guila and father, Bill.  They lived 8 miles south of Franklin on a farm in Kansas.  She was an only child for 13 years and then the best day ever happened and her little brother, Larry, was born.  She loved being a big sister and even though there were several years between them they still managed to develop a strong sibling bond and remain incredibly close until the very end.  Sondra was proud of her little brother and the man he became.  When it was time for Larry to have a family of his own she was so delighted to have the “sister” she never had with her sister-in-law, Deb, and to become an aunt to 3 nieces, Carrie May, Katie Jo and Kasey Ann.    Sondra would often be bragging about her nieces and their beautiful families.

Sondra attended a one room country school in Kansas and later graduated from Franklin High School in 1959.  During high school she did not get to enjoy a lot of the activities because she was working after school at Brads Supper Club and Café.  It was there she learned how to make the best chicken fried steak ever – which later we would all benefit from.   It was not all work and no play in high school for Sondra; she did make several fun memories with her friends and especially best friend, Sharon that would stand as a foundation for a lifelong friendship.

After high school Sondra ventured to the big city of Omaha to attend Business College.  She would often share fun stories about how scared her and her roommates would get and how she hated the winters in Omaha because of all the hilly streets.  Not only did Sondra obtain her business college degree, but she also made lifelong friendships and memories that she cherished forever.  After college she made it back “home” to Smith Center, Kansas and took a job working at the Smith County State Bank in bookkeeping.  Sondra loved working at this bank and relished the experience she was gaining.  She made fast friendships that would last a lifetime.

Although Sondra was on track to achieve great success at the Smith County State Bank, God had different plans and it was not long before she met her first and only love . . .Lavern Cole.   Lavern and Sondra complimented each other very well – Lavern loved to joke around and have a good time while Sondra tried to keep the peace, and everything organized.  They both shared their love of God and helping people.   Lavern and Sondra were married in Franklin on June 23, 1963.   With marriage came a move for Sondra from Smith Center, KS to Franklin, NE and that met finding a new job.  Sondra was offered a job in bookkeeping at the Franklin State Bank, working for Perry Slocum.  What seemed to be just a job quickly turned into finding a new work family and the beginning of making lifelong friendships. She loved watching generations of Slocum kids grow up in the bank, letting them help run the drive-up window and enjoying the summers they would work.  Sondra retired from the Franklin State Bank in 2011 but would often stop in to visit and catch up on the new technology and how everyone’s families were doing.

There will be many people that know Sondra as Mrs. Claus . . .her and Lavern dressed up as Santa and Mrs. Claus.  They would not only dress up, but they also had a sleigh…and as if that wasn’t enough, they would show up on Christmas morning and deliver gifts to children – how could you not believe in Santa after that?  The innocent belief, pure joy and excitement of the children would be enough to fuel this passion for many years.

Sondra was a giver in life and would not hesitate to help someone, even if meant sacrifice on her part.  There were several occasions the nursing home in town would contact her and ask if she would be a power of attorney for a resident who did not have family available to help them.  Sondra was not good at saying the word “No” so she ended up being a part of quite a few extended families.  If the world had more Sondra’s - it would be a much kinder world to live in.

Sondra’s first love across the board was her Lord and Savior, Jesus Christ.  She taught her children to always put their trust in God.  She attended the Franklin Missionary Church (renamed Crossgate Community Church) from her early 20’s until present. .  She served on the church board as Treasure for many years and taught Sunday school.

In Sondra’s spare time she loved to cook, try new recipes and bake with her granddaughters.  Sondra’s favorite title in the world was grandmother.  God blessed her with 5 granddaughters, Tiffany, Abby, Madison, Emily and Kinsey. She loved spoiling all of them and teaching them new things.    Her favorite holiday was Christmas, and each year she was on a mission to make the current one more special than the previous year.  If you ask the grandkids their favorite memory of Christmas with Grandma Cole you will get one unanimous response . . .AVON.   Sondra sold Avon at the bank and to a few other people just as a hobby but it wouldn’t take long for her granddaughters to figure out that Avon sold make up and it was game over.  One Christmas Sondra decided to make AVON goodie bags for everyone and hand them out as their final gifts. Little did she know that those goodie bags would become everyone’s favorite gift each year.  That is what she did – she made things special without even trying.

To order memorial trees or send flowers to the family in memory of Sondra Cole, please visit our flower store.