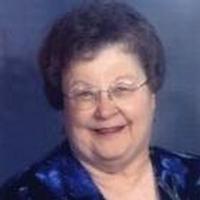 Sharon Lynne (Beck) Prusia was born on April 21, 1933 to Chester and Doris Beck in Franklin, NE. She grew up in Franklin and attended Franklin Public Schools, graduating from Franklin High School in 1951. After graduation, she worked at Franklin State Bank for several years as Secretary to the Bank President.

Sharon married her high school sweetheart, Charlie Prusia on June 13, 1954. Shortly after their marriage, they moved to Superior, NE where Sharon worked at the Farmers State Bank as a teller. In 1959, they had a daughter, Allison, and Sharon became a full time mother and homemaker. Her husband's employment caused the family to move to Norton, KS; Ellis, KS; and Basalt, CO before settling in Salida, CO for nine years starting in 1963. In Salida, Sharon was active with her daughter's school, and was a Sunday School Teacher and Church Treasure for the First Methodist Church of Salida. She was an avid Bridge player and had many friends in the Bureau Wives Club and in the community. In 1972, the family moved to Pueblo, CO and then moved to Lakewood, CO in 1974 where she resided until her death. In 1979, Sharon became a Transcriptionist for the Office of Personnel Management with the Federal Government where she continued to work until 1990.

After their retirement, Sharon and Charlie enjoyed traveling by themselves and with their daughter, Allison, her husband, John and their much loved, only grandson Nick. Many happy times were had by the whole group on cruises, trips long and short and just getting together to go out to dinner. Sharon was a constant presence in her grandson's life from moments after his birth until her death. She was a loving mother and best friend to her daughter. She was a loving and beloved wife to Charlie for more than 53 years. Sharon was a caregiver for all who needed her but especially for her parents. Even though distance separated them, she provided untiring care and support for her father until his death and for her mother until Sharon's death.

Sharon died suddenly and unexpectedly on February 21, 2007 in her own home. Sharon will be greatly missed by all who knew her and loved her.

Sharon is survived by her husband, Charlie, her daughter and son-in-law, Allison and John Thomason and her grandson Nick Thomason, all of Lakewood, CO; her mother, Doris Beck of Franklin, NE; her sister, Lynne True of Dallas, TX; her niece Katie Tibbits and family of Edmonds, WA; her niece Michelle True of Aurora, CO and many brothers-in-law and sisters-in-law and their families. Sharon was proceeded in death by her father, Chester Beck.

A celebration of life service for Sharon Prusia was held Tuesday, February 27, 2007, at 2:00 p.m.,the Hutchins Funeral Home Chapel, Franklin, Nebraska, with Pastor Neil Kloppenborg officiting. Music was provided by Connie Schmidt, organist, and they sang congregational hymns: "In The Garden" and "Nearer, My God, to Thee". Casket bearers were: Mike Epley, Dick Prusia, John Thomason, Ugene Blank, Stu Wilsman, and Myron Dallmann. Interment will be in the Greenwood Cemetery, Franklin, Nebraska. Visitation will be Monday, February, 26, 2007, at the Funeral Home from 5:00 p.m. until 8:00 p.m.

Hutchins Funeral Home, Franklin, Nebraska was in charge of arrangements.

To order memorial trees or send flowers to the family in memory of Sharon Prusia, please visit our flower store.