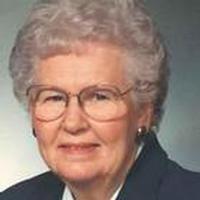 Selma Louise (Ohmstede) Portenier passed away from this life on Monday, February 20, 2012 at the Golden Living Center in Franklin, Nebraska, at the age of 96. She was born July 28, 1915 on a farm southwest of Guide Rock, Nebraska, to Gerhard and Louise (Massinger) Ohmstede.

She attended grade school at District 10 in Webster County and graduated from Guide Rock High School in 1933 followed by attendance at the University of Nebraska in Lincoln. She taught grade school at country schools near Guide Rock.

She married Glenn A. Portenier on March 4, 1940 in Hastings, Nebraska. They initially lived in Hastings then later moved to Cowles, Nebraska. They were blessed with a daughter, Carol Sue. When Glenn served in World War II, Selma (and Carol) lived with her parents in Guide Rock until Glenn returned from the war. In 1947 they moved to Franklin, Nebraska.

She was an accomplished seamstress and quilter. Selma was a soloist and enjoyed singing in the church choir as well as singing at weddings and funerals. She was active in the Jolly Jane's Extension Club and Faith Circle of the United Methodist Church in Franklin. Selma and Glenn enjoyed dancing, camping, and spending time with their grandchildren and great grandchildren.

She is preceded in death by her parents, husband, brother Eric Ohmstede, and sister Joyce Ohmstede.

To order memorial trees or send flowers to the family in memory of Selma Portenier, please visit our flower store.