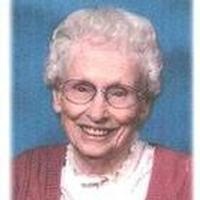 Franklin resident Ruth Elizabeth Frase passed away May 22, 2011 at the age of 92 at Bethany Nursing Home in Minden.

Ruth was born to George and Grace (Lewis) Baetz on June 11, 1918 in Reamsville, Kansas.

Ruth graduated from Franklin High School with the class of 1936.

She married Don Frase from Stamford, Nebraska on June 11, 1936. Two children were born to this union: Richard Lee Frase and Ruth Elaine Meyer.

They worked for a feeder near Wilcox, Nebraska for about 3 years. Then they moved to a farm southeast of Franklin near Ash Grove, Kansas. Where they farmed until they bought land just a mile south of the state line. They farmed there until they moved to Franklin in 1970.

Ruth worked in Smith Center, Kansas at Boogarts egg candling plant for several years and Gartin's Food Store in Franklin until she retired.

Ruth joined the Ash Grove United Brethren Church while living in Ash Grove. Later she transferred to the Reamsville Methodist Church and then to the Franklin UMC when they moved to Franklin.

Ruth always had large gardens while on the farm and did a lot of canning. Sewing was a great pride of Ruth's, especially her quilting. She made quilts for people as far away as New Jersey.

After retiring they joined a camping club and enjoyed camping.

To order memorial trees or send flowers to the family in memory of Ruth Frase, please visit our flower store.