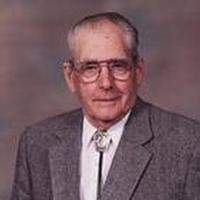 Roy was baptized at St. Pauls Lutheran Church, April 5, 1925. He was confirmed April 12, 1939, at the Zion Lutheran Church, Macon, Nebraska. Roy went to school in Macon and graduated in Franklin, Nebraska. During this time, he worked for his Dad and neighbors. Roy was proud of his ability to drive mules, run the machinery, and fix tractors, or almost anything that needed fixing.

He entered the Navy in 1943, serving on the USS Effingham in the radar division. Roy was honorably discharged in 1945. Roy then worked for various farmers.

Roy was joined in marriage to Mary (Fegter) Scott, on October 13, 1950. To this union was joined Carl and Louise Scott. James Loschen was born to this union, December 15, 1951.

Roy worked for the county and in the Blacksmith Shop in Macon, Nebraska. In 1958, he moved his family to a farm outside of Bloomington, Nebraska. He farmed and worked for the county. He was an active member of Grace Lutheran Church, serving as an elder of the church. Roy was an active member of the Paul Hart American Legion Post No. 145 of Bloomington, and served as post commander and county commander. He retired from the farm in 1988 and moved to Franklin, Nebraska. Roy enjoyed gardening, going to dances and visiting. He will be remembered for his acts of kindness to young and old alike.
He leaves in passing three children - Louise Overmiller of San Antonio, Texas, Carl and wife, Karen Scott of Lincoln, Kansas, and Jim Loschen of Bloomington, Nebraska; six grandchildren, and eleven great-grandchildren.

To order memorial trees or send flowers to the family in memory of Roy Loschen, please visit our flower store.