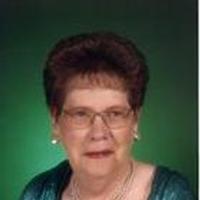 Rosalie "Rosie" May Marks died and entered into eternal rest with God on Sunday, February 3, 2008 at Franklin County Memorial Hospital in Franklin, Nebraska. Rosie was born on July 26, 1935 on a farm near Republican City, Nebraska to Leslie Arthur and Opal Rose (Graham) White. She attended Bloomington Public Schools.

On October 17, 1954, Rosie married the love of her life, Larry Eugene Marks at Republican City, Nebraska. This union was blessed with the birth of three sons, Mike, Patrick and Danny. The family lived in Orleans and Kearney, Nebraska, Phillipsburg, Kansas and Colorado Springs, Colorado, before they settled in Franklin, Nebraska in 1976. For many years, Rosie and Larry worked together in Mark's Upholstery Shop. Rosie also worked for several years at the Carey Cleaners and as a cook at the Franklin Country Club. She also worked for over 30 years at the Franklin County Memorial Hospital. Rosie enjoyed making quilts and had a passion for sewing for other people. But she truly loved every moment she was able to spend with her family.

Rosie is preceded in death by her parents, husband, Larry, one brother-in-law Dean Stone and one sister-in-law, Florence Mae White. She leaves to treasure her memory her three sons, Mike and wife Lynn Marks of North Ridge, California, Patrick and wife Vonda Marks, and Danny and wife Christine Marks all of Franklin, Nebraska; two brothers, Charlie and wife Mary White of Naponee, Nebraska, and Robert and wife Jan White of Ogden, Utah; two sisters, Esther Stone of Alma, Nebraska, and Clarice and husband Maurice Manion of Cushing, Oklahoma; Special friend Russell Lewis of Cascade, Colorado; one granddaughter, Jennifer and husband Josh Waldmeier of Belvidere, Nebraska; five grandsons, Justin and wife Brittany Marks of Holdrege, Nebraska, Andrew and Jonathan Marks of North Ridge, California, Tyler and Collin Marks of Franklin, Nebraska; three great-grandchildren, Treyton and Tara Waldmeier of Belvidere, Nebraska and Kaylie Milligan-Marks of North Ridge, California; a host of nieces, nephews, other relatives, and a world of friends. She will be missed by one and all who knew her. Memorials are suggested to the family. Memorial services will be held on Saturday, February 9, 2008 at 11:00 a.m. at First United Methodist Church in Franklin with Pastor Neil Kloppenborg officiating. Private burial will be at a later date at Republican City Cemetery in Republican City, Nebraska. Hutchins Funeral Home of Franklin, Nebraska is in charge of arrangements.

To order memorial trees or send flowers to the family in memory of Rosie Marks, please visit our flower store.