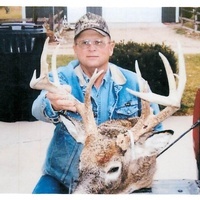 Rodney Ray Rose was born on July 16, 1947 on his grandpa and grandma’s farm near Agra, Ks to Melvin K. and Onna Lee (Brachear) Rose. He passed away from this life on January 23, 2019 in the Franklin County Memorial Hospital at the age of 71.

As a child he loved to take long bike rides along the river with either a gun or fishing pole in hand and would be gone all day long. He attended Franklin Public Schools, that is when he actually went to school. He hated school so bad he would make himself sick so would stay with his grandma Brachear and play cards or aggravation. He also had great memories of the many summers he spent with grandpa and grandma Rose working with the cattle and putting up hay. He always told how wonderful it was to come down the stairs in the morning to the smell of grandma’s freshly baked bread and tasty churned butter. Shortly after graduating from high school he was drafted into the army and spent his first year in Fort Hood, TX and the second in Vietnam. After returning home he worked for a while at Brodine Implement in Kearney and then returned to Franklin where he worked at the elevator for 40 years. He did their maintenance work of welding and repairing equipment. One of his co-workers once said that he had the gift of making something out of nothing. Matter of fact our son made the remark at the hospital when Rod didn’t want to give up the battle. “He must have gotten to the golden gates and had to stop and make a repair before entering in.”

On September 26, 1969 he married Donna Goracke of Naponee. To this union were born two children a son, John Patrick and daughter Angela Marie. Rod did not have a problem with retirement because he had all sorts of things to keep him busy. He loved to hunt, fish, tinker in his shop and in younger years played a lot of co-ed volleyball. He especially loved to go elk hunting in the mountains of Colorado but also was lucky enough to draw one permit in Nebraska. He and the family always took a summer vacation of camping, boating and sometimes just took the grandkids to do fun things.

He is survived by his wife Donna of Franklin; son John and wife, Heidi of Franklin; daughter Angie Bush and husband John of York; six grandchildren, Mackenzie and fiancé, Dayton Maul of Kearney; Payton, Saxson and Tucker Rose of Franklin; Trent and Blake Bush of York; brothers, Richard Rose and Nancy of Franklin, Dennis Rose and Barb of Omaha; nieces, nephews, and lots of other family and friends.

He was preceded in death by his parents, grandparents, sister Yvonne Whitefield and husband, Don; mother and father-in-law Norma and Cecil Goracke, sister-in-law Beth Saathoff and husband Harold and brother-in-law, Gerald I. Kugler.