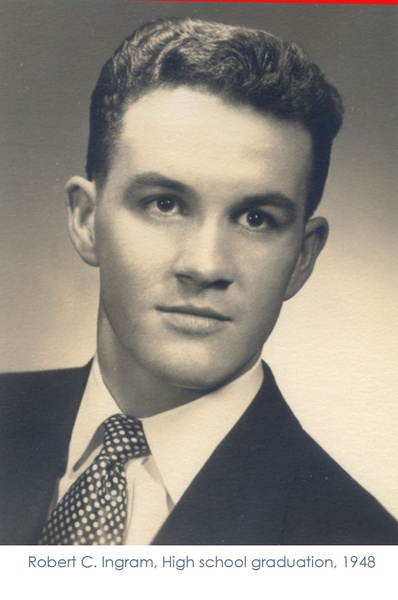 Robert (Bob) Calvin Ingram was born at home on March 1, 1930 in Franklin, Nebraska to Calvin C. Ingram and Ardess (Yates) Ingram.  He went to eternal rest on August 5, 2022 at the Central Nebraska Veteran’s Home in Kearney.

He was the second of three boys born to that family. His early years were spent in Franklin.

This was during the Great Depression and his family moved frequently, first to Callaway in 1936, to Scottsbluff in 1937 and then to Rushville in 1938.  His parents had purchased a dairy in Rushville.

Bob graduated from Franklin High School in May 1948. He participated in band, orchestra, was an excellent trumpet player, studied Latin and participated in football, basketball and track.  In the fall of 1948 after graduating from high school Bob enrolled in college at the University of Nebraska, Lincoln. He graduated in June 1953 with a B.S. in Law

He was a member of ROTC and in August 1953 he was commissioned as a second lieutenant in the Army and served in the 82nd Airborne at Fort Bragg, North Carolina. He was a paratrooper, as Bob says, “jumped out of airplanes.” He was discharged in May 1955 as a first lieutenant and returned to school at the University of Nebraska and graduated with a B.S in Business Administration in June 1957.

Initially Bob worked for the Prudential Insurance Company selling group insurance. It appears he went to Hartford, Connecticut, for training then to Omaha and Milwaukee, Wisconsin. He then moved to Detroit Michigan where he sold insurance for Alexander and Alexander and eventually worked for the Detroit Insurance Agency.  He finally went to work for United Solar Ovonic, LLC, better known as Uni-Solar where he was responsible for developing and managing benefit packages. He spent a great deal of his adult life in Michigan in the Detroit area and finally in Grosse Pointe Woods.

On June 10, 1976 Bob married Margaret Schulte in Grosse Pointe Farms, Michigan. They were later divorced. There were no children born to this marriage.

Suggested memorials are First United Methodist Church of Kearney and the Kearney Symphony Orchestra. Inurnment and  a celebration of life will be held at a later date .

To order memorial trees or send flowers to the family in memory of Robert "Bob" C. Ingram, please visit our flower store.