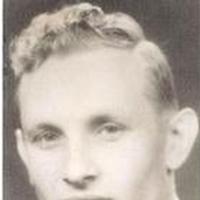 Rev. Russell Lee Malchow went home to the Lord on Thursday, May 10. He was born March 25, 1917, on the family farm in Francesville, Indiana to William and Mary (Moore) Malchow.

Rather than become a farmer, as a youth Russell discerned a call to Christian ministry. He graduated from Elmhurst College, Elmhurst, Illinois, in 1939, and from Eden Theological Seminary, St. Louis, Missouri, in 1942, and was then ordained in the Evangelical and Reformed Church, a predecessor denomination to the United Church of Christ in which Rev. Malchow held ministerial standing until his death.

On June 4, 1942 he married the love of his life, Melba V. Joquel, and moved to Billingsville, MO, for Rev. Malchow's first pastorship at St. John's Evangelical and Reformed Church. The Malchows then moved to Fraser, Michigan, where Rev. Malchow pastored Zion United Church of Christ from 1945 to 1962. In 1962, they moved to Bayard, NE where Rev. Malchow was pastor of Faith UCC through 1972, after which the family relocated to the Sandhills where Russell pastored the Thedford, Halsey, and Seneca congregations in Thomas County Parish. Rev. Malchow came to the First Congregational UCC in Franklin in 1978 where he was pastor until his retirement from full-time ministry in 1985.

Russell and Melba remained in Franklin and pursued an active "retirement" in interim ministry through 1993, serving UCC congregations in Grant, Chadron, Coleridge, Hayes Center, and Ogallala, as well as the First Christian Church in Kearney. From 1994 until his ultimate retirement in 2008 he served in the United Methodist Church, first at Bloomington UMC and then in the Wilsonville and Hendley United Methodist congregations.

Russell truly loved God's creation and loved serving God's people. He was an avid golfer, hunter and fisherman, and he enjoyed hiking and camping with his family.

Rev. Malchow was preceded in death by his beloved Melba, who passed to eternity on Oct. 24, 1999. He is survived by their four children; Ann Ivey (Ralph) of Grass Valley, CA; Edythe Eberhart (Steve), of Cortez, CO; Ruth Stewart (David) of Evergreen Park, IL; and Russell L. Malchow, Jr. (Pamela) of Las Vegas, NV; as well as 11 grandchildren and 5 great-grandchildren.

Funeral Service will be held Thursday, May 17th, 2012 at the Franklin Congregational United Church of Christ at 10:00 am

To order memorial trees or send flowers to the family in memory of Rev. Malchow, please visit our flower store.