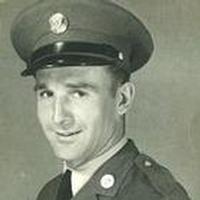 Ralph A. Wohleb, 90, of Franklin, Nebraska died January 12, 2008 in Franklin. He was born July 6, 1917 in Naponee, Nebraska to Adolph and Mary (Schnuerle) Wohleb. He graduated from the Bloomington High School.

On February 25, 1943 he married Arlene Chesnut. Ralph lived most of his adult life in the Franklin area. He served in the United States Army Air Force during World Was II in Arizona as an airplane mechanic. Ralph worked as a mechanic in Franklin and retired from Kleen Implement Company after 30 years of service.

Ralph was a member of the First Congregational United Church of Christ, Past Post Adjutant of American Legion Post #209, served on the Franklin Public School Board, and related Booster Clubs.

Ralph is preceded in death by his parents, Adolph and Mary Wohleb.

In lieu of flowers, memorial are suggested to: the American Cancer Association, or the charity of your choice.

A celebration of life service services was held on Monday, January 21, 2008 at 1:00 p.m. at the Congregational Church in Franklin, Nebraska, with Pastor Herman Keen officiating. Inurnment was in the Greenwood Cemetery earilier on Monday with a private family service. The family invites you to join them for lunch immediately following the Memorial Service, in the church basement. Elevator access is available.

To order memorial trees or send flowers to the family in memory of Ralph Wohleb, please visit our flower store.