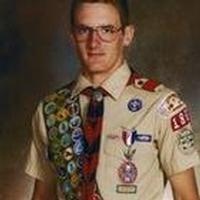 Parker Edwin Rubendall died and entered into eternal rest with his Creator and Redeemer on Sunday, August 5, 2007 at his home in Loomis, Nebraska.

Parker was born on December 19, 1985 to Barry and Cynthia (Hollis) Rubendall at Franklin, Nebraska. He was baptized on May 18, 1986, and confirmed and became a member of The First United Methodist Church in Franklin on April 11, 1999.

Parker attended Franklin Public Schools, and graduated from Franklin High School in May 2004. Following high school, he attended North Central Kansas Vocational Technical Community College in Beloit, Kansas, from which he graduated in May 2007. Parker then moved to Loomis, Nebraska and began working as a Heavy Equipment Operator for Ostgren Construction in Holdrege, Nebraska.

Throughout his life, Parker has been active in the Boy Scouts of America Troop 186, and achieved Eagle Scout on June 24, 2003. He has also been active in the Franklin Fire Department as a Junior Fire Cadet since 2001. And he has been an active member of The First United Methodist Church in Franklin, Nebraska.

Parker enjoyed hunting, fishing, canoeing, and being in nature. But his true passion in life was spending quality time with family and friends.

Parker is preceded in death by his grandparents, Don and Marilyn Hollis; one uncle, Don Hollis, Jr.; and one aunt, Marilyn Joyce Hollis Porter.

Memorials are suggested to the family.

Graveside funeral services will be held on Wednesday, August 8, 2007 at 10:00 a.m. at the Riverton Cemetery in Riverton, Nebraska with Pastor Neil Kloppenborg officiating. Arrangements are being made by Hutchins Funeral Home in Franklin, Nebraska.

To order memorial trees or send flowers to the family in memory of Parker Rubendall, please visit our flower store.