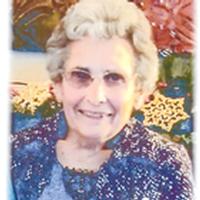 Norma Jeane (Versaw) Steinkruger was born on June 18, 1932 at home on Center Creek to Willie and Lois (Martin) Versaw. She went to her heavenly home on July 19, 2017 from her home east of Macon, Franklin County, Nebraska. She was 85 years and 31 days old.

Norma attended country school District 68 for grades 1-8 and High School in Franklin. Norma was a rule changer. After being named homecoming queen and prom queen her senior year, a new rule was put in place that prohibited anyone from winning both. She was valedictorian of her 1950 class and awarded a full ride Regent's scholarship to the University of Nebraska. Unfortunately, she never attended college due to a diagnosis of scoliosis which put her in a full body cast for 6 months following high school graduation.

Norma went to work in the doctor's office in Franklin and saved her money. She married her life partner, Keith Myron Steinkruger October 18, 1953 and joined him at McChord Air Force Base in Tacoma, Washington. Upon Keith's discharge, they moved to the farm two miles east of Macon, which has been their home since and where their children, Mark, Mary Jane and Marjorie, grew up.

Norma inherited her father's love for genealogy and was very active in many family history circles. She wrote the history of the Macon Prairie for its centennial, the history of the Macon United Methodist Church, a Steinkruger history, and helped to rewrite the Versaw- Versailles family history. She spent countless hours volunteering with friends to improve the genealogy collection at the Franklin Library over the last 30 years

Norma enjoyed being involved in many community organizations - Sunday school teacher, 4-H leader, board member on Mid Nebraska Community Service and hospital auxiliary were just a few of the many hats Norma gladly wore. She once said that quitting her town job to work full-time on the farm with Keith, was one of the hardest things she did. But the cows, cats and dog became her social circle and she knew each one by name.

Norma and Keith also took in strays. Their home was made more interesting by the many animals and foster children they welcomed. Exchange students Rudy from Chile and Anna from Sweden became extended family members.

Celebration of her life will be Monday, July 24, 2017 at 11:00 am at the Macon Methodist Church, Franklin, Nebraska, with Pastor Anthony Trevarton officiating. Mrs. Connie Schmidt will be (was) the pianist and the congregational hymns will be (were) - "Amazing Grace (My Chains are Gone)", "How Great Thou Art', and I'll Fly Away". Honorary urn bearers will be (were) - William Steinkruger, Weston Walton, Austin Walton, Ryan Wheeler, Chris McGrath, and Dusty Stamer. Inurnment will follow the church service in the Greenwood Cemetery, Franklin, Nebraska. Honors will be (were) given by the American Legion Auxiliary Post No. 209, Franklin, Nebraska. Norma was dedicated to making her community the best that could be. Please send donations to the Macon Methodist Church or the charity of your choice. Visitation will be Sunday, July 23, 2017 from 1 p.m. to 7 p.m. at the Hutchins Funeral Home, Franklin, Nebraska Online condolences can be left at www.hutchinfh.com. Hutchins Funeral Home, 1402 M Street Franklin, Nebraska 68939, was in charge of arrangements.

To order memorial trees or send flowers to the family in memory of Norma Steinkruger, please visit our flower store.