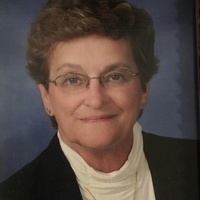 Norma Jean Smith, 91, of Franklin, Nebraska died at her home on August 7. She was born on October 18, 1926, in Akron, Nebraska to Edward and Nellie (Dunning) O’Brien. Norma graduated from Spalding Academy in 1944 and then completed her Normal School Training. Norma taught at area rural schools prior to her marriage to Francis (Muggs) Carraher in 1950. To this union were born six children: JJ, Sheryl, Dave, Bennie, Eddie, and Lynn.

Norma was widowed in 1967 and she continued raising their children on the family farm west of Spalding. She worked multiple jobs in Spalding to support her family over the next several years: Spalding Headstart, St. John’s Manor, and the Spalding Livestock Market. In the early ‘70s, she was hired by Kansas-Nebraska Natural Gas as a secretary where she worked until her marriage to Don R. Smith in 1974. After their marriage, she moved to Franklin, Nebraska where they owned and operated S.E. Smith and Sons Lumber Yard. After Don’s death in 2007, Norma continued to manage the lumberyard until her retirement in 2014 at the age of 88.

Norma was active with the Tehama Shriners Clown organization and many activities in Franklin. She was especially dedicated to her faith in God and shared her faith with her family and the members of St. Katharine Drexel Church.

Norma enjoyed many things throughout her life: traveling, reading, and tending her flower gardens. Most of all, she loved spending time with her family.

Visitation was at Hutchins Funeral Home in Franklin on August 12th from 1:00-5:00. The family greeted friends and relatives from 6:00 - 7:00 PM at St. Katharine Drexel Catholic Church. A vigil service and rosary followed at 7:00 P.M. Funeral services were Monday, August 13th at 10:30 A.M. at St. John the Baptist Church in Minden, Nebraska with Father Paul Frank officiating. Mr. Ron Pfeifer served as the lector and Mr. Willard Severson as the acolyte. The Altar servers were: Trey Carraher and Trent Carraher. Mrs. Connie Kahrs provided the music and soloists were: Mrs. Kay Stepp and Christopher Carraher. Gift bearers were: Kim Webb, Elizabeth Carraher, Kelly Bonifas, Kymberly Breham. Casket bearers were: Chad Carraher, Shane Carraher, David Carraher, Shannon Carraher, Jimmy Carraher, Cole Carrher, Chase Carraher, Christopher Carraher, Jarrod Levos, and Tyler Levos. A luncheon was served in the St. John’s hall prior to the procession to St. Michael’s Cemetery in Spalding, where Norma was laid to rest next to her son, Eddie. The family greeted friends and relatives in St. Michael’s Parish Center after the burial services. Although we’ll miss her dearly, it’s comforting to know that we’ll have another angel watching over us from Heaven.

To order memorial trees or send flowers to the family in memory of Norma Smith, please visit our flower store.