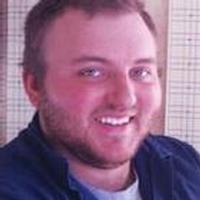 Nathan Andrew James was born August 15, 1987, in Holdrege, Nebraska to Charles "Chuck" and Debra (Hayes) James. He passed from this life on August 24, 2012, in Franklin, Nebraska.

Nathan was raised three miles north of Naponee, Nebraska, and attended kindergarten through twelfth grade at Franklin, Nebraska. Nathan then attended college at McPherson College, and the University of Nebraska-Lincoln.

Nathan attended the Franklin United Methodist Church throughout his childhood and was a member. Here he formed many strong bonds both spoken and un-spoken that remain intact.

At the age of twenty-one, he opened his own business, James Customs. This business specialized in welding repair, metal fabrication, metal art and lift systems for the handicapped. Fabrication was Nathan's passion; particularly building handicap lifts that would allow people to work who would not otherwise be able to do so.

Babe, as he was often called, loved life and lived it to its fullest. He had the ability to bring joy to all he met, especially children. Nathan was open minded and accepting to difference. He truly danced to his own music. And the music was sublime.

A graveside service for Nathan Andrew James will be Thursday, August 30, 2012, at 10:30 a.m. with Pastor Neil Kloppenborg and Pastor Nancy Leonard officiating, at the Naponee Cemetery, Naponee, Nebraska. Visitation will be Tuesday, August 28, 2012, at the Hutchins Funeral Home Chapel, Franklin, Nebraska from 1:00 p.m. until 5:00 p.m. and Wednesday, August 29, 2012 from 8:00 a.m. until 8:00 p.m. Burial followed the service in the cemetery. Memorials in honor of Nathan Andrew James may be sent to the family, or left in care of the Hutchins Funeral Home, P O Box 252, Franklin, Nebraska 68939. In lieu of flowers, we ask you to hug your children.

To order memorial trees or send flowers to the family in memory of Nathan James, please visit our flower store.