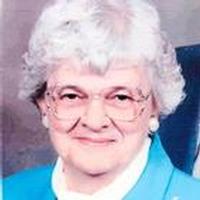 Norma Jean Mankhey of rural Franklin, Nebraska, (Smith County, Kansas), the daughter of Clarence A. and Pearl L. (Kiggins) Paulson, was born August 5, 1929, in Naponee, Nebraska. She passed from this life to her Heavenly Home, Tuesday, July 22, 2014, at the Mary Lanning Hospital in Hastings, Nebraska, at the age of 84 years, and 50 weeks.

Jean received her early schooling in Bloomington, Lanham, Bruning, and Shubert, Nebraska. In 1941, her family moved to Upland, where she made many friends, enjoyed being a drum majorette, and graduated in 1947. A short time after her graduation, Jean moved to Franklin where she lived with her Grandmother Breese and worked at the Ben Franklin Variety Store.

On November 21, 1948, (right on the heels of a huge blizzard) she was married to Kenneth Earl Mankhey of Smith County, Kansas. To this union were born two children - Julia Ann and David Charles.

Jean spent many hours caring for her garden and flowers, canning, and sewing for her family. In later years, she became more active in sewing projects for craft shows (including dolls), and church projects. These included crocheted caps for premature babies, baby quilts, lap robes and over 100 pillow cases for children at hospitals. Jean also enjoyed bringing her flowers to share at church and singing in the choir. Being active in Community Theater was a joy to her as well.

Jean was a charter member of The Art Group, which began in 1992. She held the office of President and Vice-President at various times. With her artistic talents, she created many beautiful works of art. She also enjoyed dressing up and reading stories and poems to the residents at the Franklin Nursing Home.

Jean very much enjoyed church participation at the Pleasant Ridge Country Church (Smith County, Kansas), Camp Joy (near Harlan County Reservoir), and the Franklin United Methodist Church. She made a profession of her belief and faith in Jesus at a youth revival at the Franklin Methodist Church in the fall of 1969.

She was preceded in death by her parents and step-grandson, Nathan Parsons.

A celebration of life service for N. Jean Mankhey, will be (was) Saturday, August 2, 2014, at 10:30 a.m., at the Franklin United Methodist Church, Franklin, Nebraska, with Pastor Roger Frederick officiating. Mrs. Connie Kahrs will be (was) organist. The hymns that will be sung (were sung) - Leaning on the Everlasting Arms, Love Lifted Me, and When the Roll is Called up Yonder. Casket bearers will be (were) Ben Mankley, Daniel Hill, Barry Rubendall, John Wagoner, Jeritt Wagoner, and Kent Hudson. Interment will be (was) in the Greenwood Cemetery, Franklin, Nebraska. The family suggests memorials to the Franklin United Methodist Church in care of the funeral home. Service arrangements were handled by Hutchins Funeral Home, 1402 M Street, PO Box 252, Franklin, Nebraska 68939. Online condolences can be left at www.hutchinsfh.com.

To order memorial trees or send flowers to the family in memory of N. Mankhey, please visit our flower store.