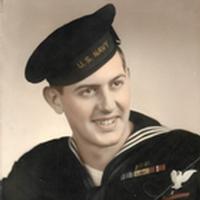 Merle George Trambly of Franklin, Nebraska, passed away peacefully on July 8, 2015. He was 91 years old. Born to Ephraim and Rena (Lynch) Trambly on June 23, 1924, Merle was one of five children. His birth place was Campbell, NE, and grew up in Franklin County, graduating from Franklin.

Merle proudly served on the USS Cimarron during World War II joining June 11, 1943. His commitment to the Navy ended April 1946. This proud Navy sailor worked in Intelligence in the Great Lakes area of Chicago, IL.

Merle worked several jobs from Nebraska to Idaho and California. The family moved back to Franklin in 1964. He opened Merle's Brake & Alignment. In 1966, the family moved to Minden. Merle worked at the Army Ammunition Depot in Grand Island. Also, he and Lorraine owned and operated the Minden Theatre and the Rose Bowl Theatre in Franklin. Merle moved his family back to Franklin in 1973. He started Merle's Radiator Shop. After retiring, Merle stayed busy mowing the Franklin golf course. In 1996, Merle began the project of assembling flagpoles honoring servicemen by raising the flags over Memorial Day weekends. He was active in the Franklin American Legion and Franklin VFW.

Merle loved to fish, hunt, play cards, play pool and meet for coffee. One of his greatest joys was attending Navy reunions annually throughout the United States. He had a sense of humor and enjoyed a good joke. He will be missed by many and remembered for all his great accomplishments.

Merle was preceded in death by his parents; one sister, Ethel Sanger.

Memorial service will be Wednesday, July 15th at 11:00 AM, at the Franklin Methodist Church. Military rites will follow at the Greenwood Cemetery in Franklin. Memorials may be made to the Greenwood Cemetery Avenue of Flags, Franklin, Nebraska. Hutchins Funeral Home, Franklin, Nebraska is in charge of arrangements. Online condolences may be left at www.hutchinsfh.com.

To order memorial trees or send flowers to the family in memory of Merle Trambly, please visit our flower store.