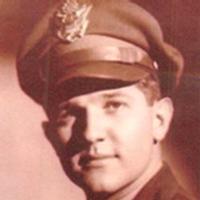 Melvin J. Tucker, known to everyone as "Mel," passed away peacefully with family at his side on Friday, January 15, 2016 in Wymore, Nebraska. Mel was 92 years old.

Mel was of English descent and his ancestors were pioneers that settled the Reamsville, Kansas area in the 1870s. He was laid to rest 15 miles from there in Greenwood Cemetery in Franklin,Nebraska during a private family graveside service.

Mel was born in Colorado Springs, Colorado to Walter W. ("Speck") and Minnie Lipps Tucker. He graduated from Colorado College and later attended the Colorado School of Mines earning his Masters degree in geology. He enjoyed playing football, snow skiing, hunting and exploring the Colorado mountains. Mel served as a pilot in the Army Air Force in World War II and in the Air Force during the Korean War retiring as a decorated officer achieving the rank of captain.
Ruthanna ("Suzy") Gonser of Denver, Colorado and Mel were married in Denver and are survived by three children: Steve Tucker, Randee Gorman and Jill Robinson; grandchildren Erik Emerson,Zack Emerson, Suzy Nootz, Sadie Houck and Tower Robinson and many loving great-grandchildren.

Mel was predeceased by his only sibling and twin sister, Melba June Mensor.

After the Korean War, Mel worked as a marketing executive at Colorado Fuel and Iron Co. in Pueblo, Colorado and later as Chief Executive and General Manager at Border Steel in El Paso, Texas. After retiring from the steel business, Mel went on to pursue his passion for training and racing thoroughbred racehorses. Mel and his brother-in-law, Frank ("Swede") Mensor, operated their own professional stable and raced for many years in all the prominent venues across the United States and Mexico, including Belmont, Santa Anita, Aqueduct, Saratoga and Bay Meadows.

Mel later settled in Franklin, Nebraska to be close to family where he lived for some thirty years. Mel will be remembered as a true gentleman, one of the nicest, most genuine human beings you would
ever meet. Mel always had a kind word, a ready smile and a natural way of making everyone feel special and appreciated. He will be missed.

To order memorial trees or send flowers to the family in memory of Melvin Tucker, please visit our flower store.