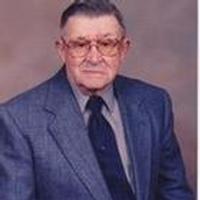 Melvin K. Rose, 88 of Franklin, NE died Monday April 5th, 2010 at the Golden Living Center in Franklin. Melvin was born on June 24th, 1921 in Agra, KS, the son of August and Eva (Addie) Rose. He was born on a farm in Agra. He attended and graduated from Agra High School.

He married Onna Lee Brachear on February 1st, 1942 in Alma, Ne. To this union was born one daughter and three sons. They moved to Colorado about a month after they were married and lived there until 1947 when they moved north of Phillipsburg then Kensington, KS. They then moved to a farm south of Franklin in 1949 and lived there until 1960 when they moved to their present home in Franklin. The love of his life passed away on July 10, 1990.

Melvin made his living farming and later worked for Bob Phillipson and Kleen Implement.

Melvin was a member of the United Methodist Church in Franklin. He was also involved in the fire department, Jaycees, and the Lion's Club.

He thoroughly enjoyed camping and fishing trips and hunting for Indian artifacts. His greatest joy was spending time with his grandchildren, great and great-great grandchildren.

He was preceded in death by his parents, wife, brother Ronald and son-in-law Don Whitefield.

Funeral services will be held at 10:00 AM Friday, April 9, 2010 at Franklin United Methodist Church with Pastor Richard Fairbanks officiating. Visitation will be from
1 PM to 5 PM Wednesday, April 7, 2010 and 8 AM to 8 PM Thursday, April 8, 2010 at Hutchins Funeral Home. Burial will be at the Greenwood Cemetery, Franklin, Nebraska. The family suggests memorials to Franklin County Memorial Hospital or Golden Living Center in Franklin, Nebraska.

To order memorial trees or send flowers to the family in memory of Melvin Rose, please visit our flower store.