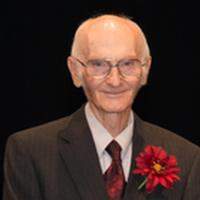 Maxie J. Robinson was born to Frank and Sadie (Strangman) Robinson, at the Brewster Hospital in Holdrege, Nebraska, on January 14, 1934. He went to his heavenly home on Monday, April 18, 2016, at the Golden Living Center, Franklin, Nebraska, at the age of 82 years, 3 months, and 4 days.

Maxie attended school at Bloomington for 12 years, graduating in 1952. He attended the University of Nebraska for three years, and then he volunteered for the draft and entered the Army, October 1955 and served in Korea from April 1956 to February 1957.

Max and Coletta Himmelberg were marred April 27, 1957, at Sacred Heart Catholic Church in Lawrence, Nebraska. To this union were born three sons - Thomas, James, and John.

After getting married, Max and Coletta moved into the same house that he was raised in. Max lived there all of his life.

Max was noted for raising and talking about hogs for years, and always looked for someone to discuss the commodity markets with him. Max and Coletta met on the dance floor, and spent many evenings during their lives dancing. He spent many hours riding his 4 wheeler out in the pasture while fixing fence, cutting weeds and cedar trees.

To order memorial trees or send flowers to the family in memory of Maxie Robinson, please visit our flower store.