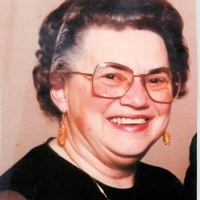 She graduated from Stamford High School and attended one year as a student at Kearney State College. She married Walter D. Butler and to this union one daughter was born, Marcia Jane.

Mary and Walter traveled the world for Walter’s positions as a construction builder of dams. Walter was the chief store keeper. Mary enjoyed the travels and could tell you many long stories of all the places they lived. Mary belonged to the Franklin Chapter 213, Order of the Eastern Star. She was a fifty plus year member. She belonged to the American Legion, Daughters of the Nile, and LOS.

Mary was preceded in death by her daughter – Marcia Jane; her parents – John and Alice Sporing; and her in-laws – Walter A. and Janet Butler.

She is survived by her husband, Walter D. Butler of Franklin, Nebraska; sister – Lois Flodine; brother-in-law – Robert Butler; and many nephews, nieces, and many friends near and far.

Mary has picked a cremation service. Christian Burial services will be held at a later date, and inurnment will be in the Greenwood Cemetery, Franklin, Nebraska. Hutchins Funeral Home, Franklin, Nebraska, was in charge of arrangements.

To order memorial trees or send flowers to the family in memory of Mary Butler, please visit our flower store.