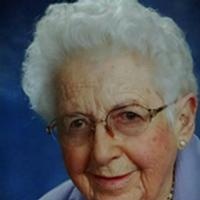 Marjorie was born on January 13, 1920, on a farm in Franklin, Nebraska, to Gustav and Grace (Hogeland) Splattstoesser. As the oldest of six children, she helped care for her siblings - Maxine, Mildred, Walter, Harold and Glenn. She graduated from Franklin High School in 1937.

On January 21, 1939, she married Reynold Clinton Beck in the parsonage of the Lutheran Church, Missouri Synod, Dakin, Nebraska. The couple had two children, Sandra Lee and James Edward. They lived in Franklin until 1954 and moved to Hebron where Reynold began work at Korff Lumber. They returned to Franklin in 1975 and Reynold worked at Plank Lumber until he retired.

During WWII Marjorie worked as an operator at the local telephone company.

Marjorie had a passion for art and began oil painting in her 60's. She created many beautiful paintings, and many of her paintings were of her beloved Nebraska landscape. She enjoyed sharing her work with family and friends. She was a member of the Franklin Art Group and her paintings were often on display.

Marjorie was preceded in death by her parents, her husband Reynold, her brothers Walter and Harold, and sisters Maxine and Mildred, and daughter Sandra.

A celebration of life service for Marjorie M. Beck will be (was) Thursday, May 28, 2015 at 10:00 a.m., at the Grace Lutheran Church, Franklin, Nebraska, with Pastor Chad Boggs officiating. Congregational hymns will be sung (were sung), were "Amazing Grace", "What a Friend We Have in Jesus", and "How Great Thou Art," with Mrs. Laura Adam, organist. Casket bearers were: Rodney Gardner, Bradley Gardner, Jon Beck, Sean Gleason, Doug Plank, and Neil Plank. Interment was in the Greenwood Cemetery, Franklin, Nebraska. The family suggests memorials to the Church in memory of Marjorie. Visitation was Wednesday, May 27, 2015, from 9:00 a.m. to 7:00 p.m. at Hutchins Funeral Home. Online condolences maybe left at www.hutchinsfh.com. Hutchins Funeral Home, Franklin, Nebraska was in charge of service arrangements.

To order memorial trees or send flowers to the family in memory of Marjorie Beck, please visit our flower store.