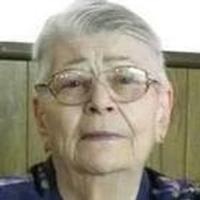 Margaret Ann (Wilmot) Karabin of Bloomington, Nebraska, was born May 10, 1930, at Boone, Iowa, to Raymond and Susan (Strobl) Wilmot, and died Monday, November 17, 2014, at Bryan Medical Center East, Lincoln, Nebraska, at the age of 84 years, 6 months, and 7 days.
They moved to Red Cloud, Nebraska, for a few months. Later they moved to Franklin County in March of 1937. Margaret attended country schools thru the eighth grade. She attended high school in Franklin for 1 ½ years, before they moved to Bloomington in 1946. She completed high school at the Bloomington High School, graduating with the class of 1948.
In October of 1948, she married L. Melvin Berlie. To this union two daughters - Leila and Linda and one son - Larry were born. They divorced in 1961.
In March 1963, she married Eldon R. Penas. To this union a daughter - Roberta (Bobbi) was born. Eldon passed away in 1981.
In January 1983, she married John J. Karabin, who died in December 2009. They lived in Grand Island, Cairo, and Bloomington, all in Nebraska.
Margaret worked for the Riverside Inn as a night auditor for 23 years, until her retirement. Her many hobbies were crocheting, reading, embroidery and gardening.
Margaret was preceded in death by her husbands - Eldon Penas and John Karabin; parents - Raymond and Susan Wilmot; daughter- Leila Nelson; grandson - Randy Schiechardt; brother - Jim Wilmot; two sisters - June Kearns and Milly Majors.
She leaves to mourn her death two daughters - Linda and husband, Delbert Linden of Marquette, Nebraska, and Bobbi and husband, Bill Spangler of Allen, Nebraska; son-in-law - Dick Nelson of Grand Island, Nebraska; three sisters - Mary Jean Smith, Elberton, Georgia, Helen Bush, Spokane, Washington, Dorothy Robertson, Coeur d'Alene, Idaho; two brothers - Alfred "Bud" Wilmot, Cottonwood, Alabama, and Leslie Wilmot of Meade, Washington; 11 grandchildren; 18 great-grandchildren; 2 great-great-grandchildren; and a host of other relatives and friends.
A memorial celebration of life service will be (was) held Thursday, November 20, 2014, at 4:00 p.m., with Pastor Scott Randall officiating. Inurnment will be at a later date in Maple Grove Cemetery, Bloomington, Nebraska. Memorials can be given to the family or donor's choice in honor of Margaret Karabin. Friends may sign the memorial register, Thursday, November 20, 2014, from 9:00 a.m., until service time at the funeral home.
Hutchins Funeral Home, Franklin, Nebraska, was in charge of arrangements.

To order memorial trees or send flowers to the family in memory of Margaret Karabin, please visit our flower store.