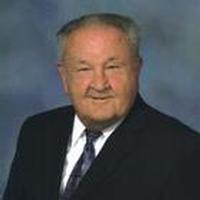 Lyle had one brother, Lemoine Stover. He was baptized in the Catholic Church in Naponee, Nebraska, as a child. Lyle attended the Naponee Public School and graduated from Naponee High School with the class of 1946. He was active in sports during those years. Following his school years, he was employed by Cudahay plant in Alma, Nebraska, and drove a route for Applegate Creamery to pick up cream and eggs. In late 1946, Lyle became the assistant depot agent in Franklin, Nebraska. He married Delpha Blum on October 5, 1947. They made their first home in Franklin. They moved to Alma, Nebraska, and Lyle was employed with the company building Harlan County Dam. He was a foreman for the machine maintenance department. Also during this time the company sent men to the northern part of Nebraska during the blizzard of 1949. Following the completion of the Harlan County Dam, Lyle and his brother, Lemoine, started a Used Vehicle Sales business in Alma. In 1954, Lyle and his father purchased the Ford Dealership in Franklin. The family moved back to Franklin, in July 1954. During the 37 plus years that Lyle was a dealer for the FORD and MERCURY dealership known as Franklin Motor Company, Inc. He was active with the New Car Dealers of Nebraska and served several years as a member of the Board of Directors. Lyle retired from his business in December 1990, and started an independent vehicle sales and service. After 10 years, Lyle retired to just enjoying life, golf, family, and restoring his 1957 Ford Fairlane Retractable Hardtop. Lyle was a member of the Franklin Country Club, Nebraska New Car Dealers Association, a member of the Franklin Volunteer Firemen from 1958 to 1992, and was a Franklin EMT from 1974 to 2010. He also drove a school bus for the Franklin Public Schools for several years as a substitute and activity driver. He enjoyed the kids very much. Lyle was a member of the First United Methodist Church, Franklin.
He is preceded in death by his parents, brother, and daughter-in-law, Karen Stover.

He is survived by his wife - Delpha, of the home; daughter - Cheryl and husband, Frank Chapman of Bartelso, Illinois; son - Randall of Franklin, and friend- Dee Reinhardt; former daughter-in-law - Pat Clancy of Lincoln, Nebraska. He is survived by seven grandchildren - Troy and wife, Renay Stover of Grand Island, Nebraska, Mindy and husband, Jon Hackel of Ord, Nebraska, Shane and wife, Erika Chapman of Indianapolis, Indiana, Windy Space of Minden, Nebraska, Todd and wife, Roxann Chapman of San Jose, California, Jason Stover and Angie Statler of Grand Island, Nebraska, and Arial Steiner of Franklin, Nebraska. Lyle is survived by six great-grandchildren - Andrew and Rachel Stover, Robert and James Space, Payton Hackel, and Jade Statler Stover. Other relatives include sisters-in-law - Mickey Stover of Edison, Nebraska, Mary Blum of Kearney, Nebraska, and Phyllis and husband, Ron Coffin of Arvada, Colorado, and many other relatives and friends.

A celebration of life service for Lyle J. Stover, will be (was) Saturday, March 23, 2013, at 10:30 a.m., at the United Methodist Church, Franklin, Nebraska, with Pastor Nancy Leonard officiating. The hymns will be (were) "Beyond The Sunset," "In The Garden," and "On Eagles Wings" which were prerecorded. Honorary bearers were: Franklin Volunteer Fire Department and Franklin County Emergency Medical Technicians. Inurnment followed the family lunch at the Naponee Cemetery, Naponee, Nebraska. The family suggests memorials to: Franklin County EMT, Franklin Volunteer Fired and Rescue or United Methodist Church, all of Franklin, Nebraska.
Arrangements were made with the Hutchins Funeral Home, Franklin, Nebraska.

To order memorial trees or send flowers to the family in memory of Lyle Stover, please visit our flower store.