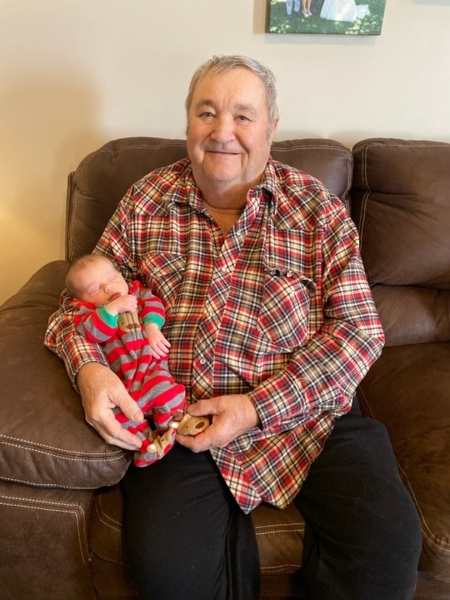 Lyle David Johnson, 75 of Bloomington NE passed away Monday, November 2, 2020 at his home.

Funeral Services will be Friday, November 6, 2020 at Grace Lutheran Church in Franklin, Nebraska, at 2:00 p.m. with Pastor Dave Hutson officiating. Interment will be held following services at the Maple Grove Cemetery in Bloomington NE with military rights. Current recommendations for faith based services will be followed and use of a face mask is encouraged. Public viewing with family members will be Thursday, November 5, 2020 at Hutchens Funeral Home in Franklin NE from 6:30-8:30 p.m.

Lyle was born on March 2, 1945 in Holdrege NE to Phillip L. and Kathryn E. (Berlie) Johnson. He grew up near Bloomington and graduated from Bloomington High School with the class of 1963. He attended Chadron State College from 1963-1965. He entered the Army National Guard in 1965 and was honorably discharged in 1971. On August 7, 1966 he was united in marriage to Delores I. Bolle and to this union two daughters were born: Audra and Pam. The family made their home on a farm near Little Cottonwood Creek.

Lyle worked briefly for the State of NE, Department of Roads, farmed throughout his lifetime, and also worked for the Franklin County Department of Roads for 11 years. His true passion was being outdoors on the land where he grew up near his childhood. He enjoyed working the fields, raising hogs and cattle. While work was important, he always took time for his family. They share many fond memories which include hog chores, chopping musk thistles, roguing, fishing, hunting and gardening. Lyle did not know a stranger. He was active in many organizations and served as a member of the following: Grace Lutheran Church and church council, Naponee School Board, Ash Grove Township, The American Legion Post 145, The Village Board of Bloomington and made several blood donations for the American Red Cross in his early years.

Lyle loved his devoted wife of 54 years and treasured many special memories together. They were a team and you didn’t see them apart from one another very often. They enjoyed square dancing and camping in their retirement years where they developed many special friendships. Lyle also was dedicated to his family. As long as family was together there was joy in his heart. The grandchildren have many fond memories of four wheeling, fishing, hunting and husker games. He cherished Audra and Pam and told them often how much he appreciated their thoughtful and random acts of kindness. Although he didn’t have any sons he thought of Steve and Mike as his own.

He was preceded in death by his parents, Father in Law and Mother in Law Carl and Florence Bolle.

Memorials in Lyle’s honor are kindly suggested to the American Legion Post 145 and Grace Lutheran Church.

Hutchins Funeral Home of Franklin assisted the Johnson family with these arrangements, www.hutchinsfh.com

To order memorial trees or send flowers to the family in memory of Lyle Johnson, please visit our flower store.