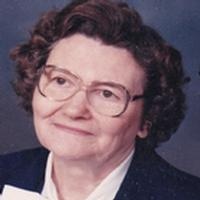 Lorraine Marie (Yelken) Kahrs, daughter of Dieke and Louise Folkers Yelken, was born on January 6, 1925 on the family farm in Spring Valley, Near Riverton, NE. She passed away on Sunday, March 22, 2015 in the Golden Living Center in Franklin.

This union was blessed with three children, Wesley, Jerry and Connie. Richard and Lorraine spent the first 14 years farming south of Riverton. In 1960 they moved to the family farm in Spring Valley. She was active in the extension club there, as well as the Spring Valley Methodist Church until it closed. After that she went to the Franklin United Methodist Church where she sang in the choir and was in the United Women Methodist Circle. In 1992 Richard and Lorraine retired and moved into Franklin. Lorraine loved to sing, play the piano, sew quilts and read books in her later years. While on the farm she always had a large vegetable garden and many flowers.

She will be remembered most of all as a loving, caring mother, grandmother, sister and friend. Lorraine is preceded in death by her parents, husband Richard, brothers Leonard and Gerald and sister Geraldine Yelken Monie. She is survived by three children, Wes Kahrs of Franklin, Nebraska, Jerry Kahrs and wife Katherine of Valparaiso, Indiana and daughter Connie Kisselman and husband Glen of Golden, Colorado; four grandchildren, Juliana, Andy, Isaac and John; sister Ruth Yelken Schmidt and husband George; nieces, nephews other relatives and friends.

To order memorial trees or send flowers to the family in memory of Lorraine Kahrs, please visit our flower store.