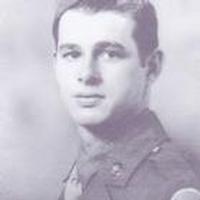 Lloyd Francis Vauthrin was born on February 12, 1923 at the farm house of his parents, Martin and Ruth (Metzger) Vauthrin northwest of Topeka, Kansas. He departed this life on December 5, 2013 at the age of 90 years, 9 months and 16 days.

He was preceded in death by his parents, Martin and Elizabeth Vauthrin; son, Ronald Vauthrin; grandson, Tyler Hawks; brother, Martin Vauthrin; and sisters, Toy Richter and Dolly Pawley. He is survived by his wife, Lael, of Franklin, NE; an adopted daughter, Christine Vauthrin; an adopted son, Robert Vauthrin and his wife, Susan, granddaughter, Sierra Danner and grandson, Josiah Vauthrin all of Kearney, NE.

He was looking forward to becoming a great grandfather in March.

Lloyd grew up on the farm where he was born. He graduated from Ozawkie, Kansas High School in 1940. He attended a sheet metal school in Kansas City, KS which prepared him for a job at Consolidated Aircraft Co. in San Diego, CA until drafted into the U.S. Army in February of 1943. He served in India until the end of WWII. He was honorably discharged in January of 1946. He went to Woodbury Business College under the G.I. Bill and earned a B.A. Degree.

On December 22, 1946, Lloyd married Elizabeth Lael Grover. To this union a son, Ron was born on September 1, 1948 and in 1969 the adoption of Christine and Robert. Lloyd retired in 1984. His first love was his wife, whom he shared 66 years, 11 months, and 13 days. He spent the rest of his healthy life gardening, a labor he loved, and traveling the U.S.

Cremation was selected by the family. Inurnment will take place at a later date at the Meriden Cemetery in Meriden, Kansas.


Memorial services will be held on Sat. Dec.14th at 11:00 a.m. at the Franklin United Methodist Church, with Pastor Roger Frederick officiating.


Memorials are suggested to the Franklin United Methodist Church. Online condolences can be given at www.hutchinsfh.com.

To order memorial trees or send flowers to the family in memory of Lloyd Vauthrin, please visit our flower store.