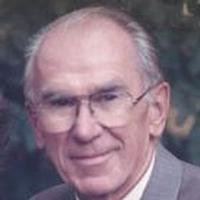 Lloyd was born November 6, 1921, in Franklin, to Jesse Howard and Ada May (Carnahan) Naden, the youngest of three other siblings - Beth, Doyt, and Jack.

He graduated from Franklin High School in 1939 and then entered pharmacy school at the University of Nebraska where Lloyd also played football as a Cornhusker, making the freshman traveling team. He enlisted in the Navy at Omaha, Nebraska on February 5, 1942, shortly after the nation entered W.W.II. Lloyd served as a Pharmacist Mate First Class during the war and was discharged on December 6, 1945, at Lambert Field, St. Louis, Missouri.

Lloyd was married to Hazel Alma Young, December 12, 1945, at Evansville, Indiana. After graduating from the University of Nebraska Pharmacy School in 1947, the Nadens moved to Franklin where Lloyd entered into the family business of Naden's Pharmacy with his father. He retired in 1987.

Lloyd loved to be outdoors and enjoyed hunting, fishing, working in his garden, and he enjoyed seeing Cornhuskers play football, having season tickets at Memorial Stadium since 1947. His family was very important to him and he and Hazel enjoyed watching their children and grandchildren grow up and attending their various school events.

He is survived by his children - Mike and wife Bonnie of Las Cruces, New Mexico; Kerry and husband, Don Hopkins of Lincoln, Nebraska; and Kim and wife, Evonne of Franklin; five grandchildren - Matthew Naden of Palm City, Florida; Jessica Rasser-Theis and husband Dan of Omaha; Andrew and wife Shelley Naden of Doniphan, Nebraska; Kathleen and husband Damien Riley of Hastings; and Jacki and husband Darrick Manning of Lincoln, Nebraska; ten great-grandchildren - Quinton, Caden, and Avery Rasser, and Jayden Theis; Connor and Kyler Riley; and Lacie, David, Cole, and Gage Naden; as well as numerous other relatives and friends.

Lloyd was preceded in death by his parents, brothers, and sister, and his wife, Hazel.

Memorial service for Lloyd G. Naden, will be Saturday, October 11, 2014, at 10:30 a.m., at the Franklin Congregational United Church of Christ, in Franklin, Nebraska, with Pastor Roger Frederick officiating.
Inurnment of Lloyd with Hazel will be in the Greenwood Cemetery, Franklin, Nebraska with military honors.

To order memorial trees or send flowers to the family in memory of Lloyd Naden, please visit our flower store.