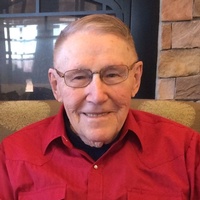 Lewis was born on March 29, 1926 and adopted by Ernest and Marcella Driewer of Hampton. Lewis was baptized and confirmed at Zion Lutheran Church and graduated from Hampton High School in 1944. Lewis was united in marriage to Evelyn Rathje on March 18, 1951. He served in the Unites States Army Signal Corp in Germany from 1951 to 1953. Upon his return, he and Evelyn moved to Hampton where he farmed, fed cattle and sold insurance.

He was a life time member of the American Legion and the Veterans of Foreign Wars. He was a member and active in the Zion Lutheran Church and later at the Saint Paul Lutheran Church in Republican City. In April 1988, they moved to Taylor Manor, outside of Republican City. While living there he was fortunate to find his birth mother’s family, the Kuleks’ of Red Cloud. He enjoyed fishing, being outside with nature and visiting with people at the coffee shop. In 2015, they moved to Willow Brook Assisted Living in York.

Those who remain to cherish his memory are his wife, Evelyn; daughters, Leslie (Ed) Lippert, Vicki (Neil) Rasmussen; son, Jim Driewer, and daughter-in-law, Janet Driewer; 14 grandchildren and 6 great grand- children. He is also survived by his sister, Virginia Nuss. He was preceded in death by his parents and his son, Larry Driewer.

To order memorial trees or send flowers to the family in memory of Lewis Driewer, please visit our flower store.