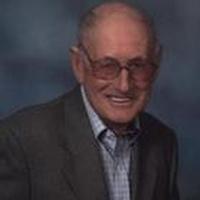 Bud was born April 12, 1923. He attended District 20, Spring Valley School and graduated from Franklin High School in 1940. He entered the Navy on April 12, 1943 and served during World War II on the USS Reno and was discharged on April 18, 1946. After returning to Franklin, he was a partner in Schmidt Transfer with his brother Raymond. After a few years, he returned to the family farm until his retirement. Even after retirement he enjoyed truck driving for various farmers in the community.

On August 4, 1950, he was united in marriage to Helen Steinkruger. To this union six children were born; Sheila, Alan, Jim, Douglas, Mark and Tammie.

Funeral services will be held at 10:30 AM Tuesday, April 13, 2010 at Franklin United Methodist Church with Pastor Robert Zeigler officiating. Visitation will be from
2 PM to 5 PM Sunday, April 11, 2010 and 8 AM to 8 PM Monday, April 12, 2010 at Hutchins Funeral Home. Burial will be at the Greenwood Cemetery, Franklin, Nebraska. The family suggests memorials to Franklin County Memorial Hospital or United Methodist Church in Franklin, Nebraska.

To order memorial trees or send flowers to the family in memory of Lester Schmidt, please visit our flower store.