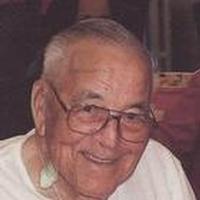 Leonard Eugene Barker of Republican City, Nebraska, was born November 14, 1924, at Arapahoe, Nebraska to Ray and Esther Irene (Eagleson) Barker. He was one of seven children and passed away, February 19, 2013, at the Kensington Assisted Living Center, Hasting, Nebraska, at the age of 88 years, 3 months, and 5 days.

Leonard, better known as Gene, was a graduate of the Franklin High School, class of 1943, and was drafted into the Army in June of 1943. He landed with the 24th Division, Field Artillery in New Guinea, and was injured when they landed in the Philippines. After recovery, he returned to the Philippines, before becoming part of the Occupation forces in Japan. He was married to Dorothy Louise Huchtemann on March 14, 1946, at Smith Center, Kansas, and went to work on the Harlan County Dam, before joining the California National Guard. The guard was activated and he was sent to Korea, in 1951 and 1952. Gene worked at many different Jobs, before he became the city maintenance man for the Republican City. He retired in 1986, after 16 years with the city.
Gene believed in family, friendship, country, good food and fun. The family would arrive for holidays knowing that Gene would have activities planned, and was ready to get started. He enjoyed playing with the two boys, grandchildren, and great grandchildren.
Gene was preceded in death by his parents; two brother, Max and Boots; three sisters, an infant, Darlene SaBell and her husband James, Opal Johnson and her husband, Elmer; and one brother-in-law, Scott Bobbitt.

He is survived by his loving wife - Dorothy currently residing at the Kensington, Hastings, Nebraska; two sons - Ronald and wife, Tarica Barker of Somonauk, Illinois, and William and wife, Jeannette Barker of Hastings, Nebraska; five grandchildren - Timothy and Andrea Barker, Thomas and Amy Barker, Shawn and Chelsey Paulson , Christine and Rick Hock, and Randy and Renee Paulson; 14 great-grandchildren; 5 great-great-grandchildren; a sister - Lois Bobbitt of Apache Junction, Arizona; and a host of other relatives and friends.

A celebration of life service for Leonard Eugene "Gene" Barker, will be (was) at 2:00 p.m., Saturday, February 23, 2013, at the Hutchins Funeral Home Chapel, Franklin, Nebraska, with Pastor Nancy Leonard officiating. The organist will be (was) Mrs. Connie Kahrs. Casket bearers will be (were): Wayne Petersen, Timothy Barker, Thomas Barker, Shawn Paulson, Randy Paulson, and Roni Hodges. Interment will be (was) in Maple Grove Cemetery, Bloomington, Nebraska. The family suggests memorials to the Franklin County Memorial Trust, in care of the Hutchins Funeral Home. Visitation will be (was) Friday, February 22, 2013, at the Hutchins Funeral Home, from 9:00 a.m. to 8:00 p.m., and on Saturday from 9:00 until service time. The family will (did) receive friends at the funeral home on Saturday from 1:00 p.m. until service time. Online condolences may be sent to www.hutchinsfh.com.

To order memorial trees or send flowers to the family in memory of Leonard Barker, please visit our flower store.