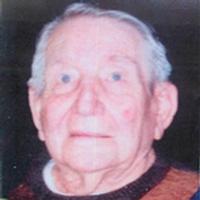 LaVerne Brunke Schmidt, former resident of Franklin, Nebraska, was born February 9, 1926 to Brunke and Marie (Braams) Schmidt southwest of Macon, Nebraska. He departed this life June 6, 2015 at the Midwest Covanent Home in Stromsburg, Nebraska, at the age of 89.
LaVerne was baptized March 7, 1926 at the Lutheran church west of Macon, Nebraska by Pastor C. Weber. He was confirmed in 1940 at the Evangelical Lutheran church south of Hildreth, Nebraska by Reverend Albert Jungmeyer.
LaVerne was united in marriage to Betty Sanger on October 1, 1950 at the Zion Lutheran church west of Macon, Nebraska. LaVerne farmed in the Hildreth, Macon and Franklin areas until he entered the Homestead Nursing home in Lincoln, Nebraska in August of 2003. He moved to the Midwest Covenant Home in Stromsburg, Nebraska in August of 2010.
LaVerne was known for his hard work, love of farming, his love for his family and especially his granddaughter. He was a member of the Grace Lutheran Church.
LaVerne is preceded in death by his wife, Betty, Brother and sister-in-law, Ilert and Jan, brother, Virgil, brother-in-law Francis Dyer, and brother-in-law Harold Ebke.
LaVerne is survived by his son, Larry Schmidt of Seward, a daughter and son-in-law, Andrea and Dennis Matzner of Gresham, a granddaughter and husband, Kasey and Ryan Spellman of Lincoln, a great-grandson, Jameson Spellman of Lincoln, sister, Lilly Dyer of Hastings, sister, Viola Ebke of Kearney, brother and sister-in-law, Leo and Sharon Schmidt of Franklin, a sister-in-law, Almetta of Holdrege and a host of nieces and nephews.

To order memorial trees or send flowers to the family in memory of LaVerne Schmidt, please visit our flower store.