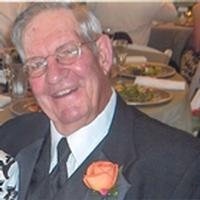 Doc was born, February 24, 1935, on his uncle's farmstead in Fowler, Colorado, to Chester M. and Alfreeda A. (Marvin) Rundle.

He received his education at Logan High School, 1 year at Garden City Jr. College, served his country for four years in the U.S. Navy, (at the dismay of his mother), 1 year at Fort Hays University, and graduated from Kansas State University with his doctorate in Veterinary Medicine in 1964.

September 10, 1957, he was united in marriage with Patricia Cook at the Christian Church in Logan, Kansas. This marriage was blessed with three daughters, and a son.

After graduating from veterinary medicine, the family made their first home in Smith Center, Kansas, where he practiced alongside Hi Faubian for 13 years. He was active in many community activities, such as President of the School Board and playing town-team basketball.

In 1977, the family moved to Franklin. He opened his own private practice - Tailgate Vet Clinic. That is how many of you came to know Doc, and his generous and strong love of every one of your furry family members. He retired from practice in the late 1990's. Doc missed his friend and the family connections he made over his career. He loved his buddies he met at the local coffee shop. Please save a seat for him.

Doc had a wonderful, generous side that many didn't realize. On many occasions he helped community members, with financial needs, and gifts of food, while wanting to remain anonymous or playing Secret Santa.

His family will always remember his love of humor and sarcasm, gardening, and boy did he love his PIE!!!

Doc was preceded in death by his parents, several uncles, aunts, cousins, and a sister-in-law.

A celebration of life service for Kenneth "Doc" Rundle, will be (was) Friday, January 22, 2016 at 2:00 p.m., at the Congregational United Church of Christ, Franklin, Nebraska, with Pastor Jay Towell officiating. Casket bearers will be (were): Joshua Hughes, Jesse Hughes, Joseph Hughes, Derek Rundle, Dillon Burgess, Keaton Burgess, Clayton Preble, and Cale Preble. Honorary Casket Bearers will be (were): Gary Janssen, Leroy Harms, Woodrick Asay, Tom Moore, Stacey James, Rodney Frerichs, Scott Pringle, Tim Kahrs, Jason Matney, and Gene Goeble. Interment will be (was) in the Greenwood Cemetery, Franklin, Nebraska. The family suggests memorials to either Asera Care of Kearney or Congregational United Church of Christ, Franklin. Visitation will be (was) Wednesday, January 20, 2016, from 9:00 am to 12:00 pm, and Thursday, January 21, 2016, 9:00 am to 7:00 pm with the family receiving friends Thursday evening from 6:00 pm to 7:00 pm at the funeral home. Online condolences can be left at www.huthinsfh.com. Hutchins Funeral Home, Franklin, Nebraska was in charge of arrangements.

To order memorial trees or send flowers to the family in memory of Kenneth DVM, please visit our flower store.