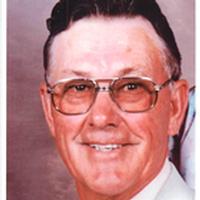 Keith M. Steinkruger, 86 of Franklin died June 5, 2016 at the Bethany Nursing Home, Minden, NE.
Keith was born October 13, 1929 at home in Salem township, Franklin County Nebraska to William C. & Anne (Schurman) Steinkruger. Keith was baptized and confirmed in the Macon United Methodist Church where he has been a member for 72 years. He grew up helping his father with the animals and farming. Keith rode his horse to school while attending District 21 and graduated from Hildreth High School.in 1947. Due to a shortage of help, he drove the school bus his last two years of high school.

Keith helped on the farm until enlisting in the Air Force in Feburary 1951. He was a graduate from Airplane and Engine Mechanics school at Hancock Field, Santa Maria, Calif. and was then assigned to the Mobile Training Wing as a mechanic and instructor for the engines on the C-130 planes and traveled to many bases to train others.
On October 18, 1953, Keith married Norma Jeane Versaw at the Methodist Church in Franklin, Nebraska. After living a short time in Tacoma, Washington, Keith received his discharge at Chanute Air Force Base, Rantoul, Illinois on Nov. 19. 1954. They then moved to a farm near Macon which has been their home since and where their children, Mark, Mary Jane and Marjorie grew up.

Keith has always been involved in community organizations having served the Macon District 9 school board, the township board and as Secretary-Treasurer of the Franklin Rural Fire District for 36 years.

Keith enjoyed collecting Case toy tractors and machinery. He especially liked to visit pawn shops and flea markets to search for rusty tools which he would then take home and polish until they looked like new.

Keith was preceded in death by his parents, Bill & Anne Steinkruger, one brother, Neal and his wife, Dolores.

To order memorial trees or send flowers to the family in memory of Keith Steinkruger, please visit our flower store.