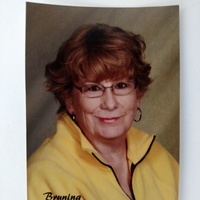 The last 5 months of Kay’s life were not a reflection of how she lived her previous 78 years which were full of adventure, independence, laughs, and love all while being surrounded with family and friends. If anything, the last few months demonstrated one characteristic of Kay that sometimes was overlooked and that is Strength. Kay was resilient and had a quiet strength that carried her through the good times and bad times of her life.

Kay was born in Geneva, Nebraska to Royal and Lily Hampton on February 1, 1940 in the family home. She had her older sister, Helen by her side throughout her lifetime up until Kay’s last day before going to heaven. Together they loved each other through numerous hardships and never wavered in their bond. Kay’s father passed away when she was only 10 years old leaving her mother and sister by her side to form a strong trio of women. Kay attended St. Joseph’s Catholic School for elementary and middle school education before graduating from Geneva Public High School in 1958. Upon graduation, she landed a job that she really enjoyed at the Geneva State Bank working as a secretary. Who knew this would be the start of a new chapter in Kay’s life story…her true love story.

Christmas of ’58, a good looking young man, home on leave from the Army, asked a mutual friend to coordinate a blind, double date with a “good lookin’ gal”. That is when Kay met Bob Christiancy, her one and only soul mate. Only knowing his name, you can imagine the look on Kay’s face when “Bob Christiancy” presented himself at her bank to make a deposit. Bob knew exactly what he was doing as he had come by to check out his upcoming date! Of course, Kay made an impression on Bob and the rest is history. They continued their courtship from that point on until Bob proposed to Kay in true Bob & Kay fashion on April 1, 1960 (April Fool’s Day). Bob’s prankster ways and Kay’s love for him filled her life and their future with many, many laughs and good times.

She married her true love on October 15, 1960. They didn’t hesitate to start their future together as they moved immediately to Central City, Nebraska where Bob started a 3 way partnership in the tire business. Kay added a new job to her resume and that was the role of “Mom”. Her first son, Steve, was born on March 29, 1962 and so the family union grew and more memories were created. They later moved back to Geneva where a new tire business partnership was formed with another individual. Kay was elated to also welcome Baby Boy #2, named Jim, on December 19, 1963. In March of 1967, with a 3 year old and a 5 year old in tow, Kay & Bob took a leap of faith and dissolved the partnership in Geneva in order to set out on their own and chase their dream of being sole business owners. Being officially unemployed and taking a huge risk, together they were scrappy, tenacious and driven to be successful as business owners. This decision brought Kay to Franklin as it was the landing spot to continue the adventure together to launch “Bob’s OK Tire Store” and further establish the family legacy in May 1967. Three years later, Kay finally got her “little girl” and brought Lisa into the world on March 26, 1970.

Kay, alongside Bob, built relationships and friendships with so many amazing people in the community from the landlord of the building for Bob’s OK Tire that taught them the history of the town to loyal customers who supported the business growth to the different organizations that they joined and built friendships as strong as family. Kay was involved in the Mrs. Jaycees, was a devote member of the St. Katharine Drexel Catholic Church & alter society, PEO, American Legion Auxiliary, & Valley Gun Club. In her early years she volunteered for Cub Scouts, 4-H, and numerous community endeavors all of which built strong, lifelong friendships.

Kay’s numerous interests centered on people and outdoors. She had a green thumb and enjoyed creating her flower gardens in her beautiful backyard. Kay loved to cook and entertain family and friends. Her backyard was the venue for most of her parties and gatherings and the background music was that of the laughter of friends and family having a great time. She valued every minute spent with family, friends, church and community. Fun excursions consisted of river outings to canoe, tube, fish & swim; hikes, 4 wheeling, artifact finding, mushroom hunting, camping…the list is endless. Travel was a passion for Kay as well. She was blessed with many amazing trips. She and Bob were fortunate enough to travel to Hawaii more than once, Acapulco, Trinidad, and Tobago. Through the years, Kay filled her travel card with trips to Branson, Memphis, Wisconsin, Mexico, Colorado and many landmarks in-between to enjoy time together with her friends. Many times their shared interest of Elvis and his music took her & her friends on a road trip somewhere great. Family vacations were frequent, even as the family expanded through marriages and grandchildren. Many cherished memories were created during Colorado family vacations. Wherever life would take Kay, she would go!

Kay and Bob worked diligently together to launch their business as Kay served as the bookkeeper on her “off” time from raising 3 kids. As the family grew older and more independent, Kay worked outside the home as well, until recently. She worked for the social services department, elementary school, library, and Senior Center to name a few. Of all the different occupations in her lifetime, the one she was most proud of was “Grandma”. Once grandkids entered her life, she became an instrumental part of their early development and lives. Her true passion was her grandkids and anything that had to do with them. She was blessed with 5 grandkids (Marissa, Katrina, Trenton, Tyler & Jaxon). They all loved her dearly. They were obsessed with their grandma and the many things she did for them…like, mud pie maker, sandwich artist, summer camp coordinator, fishing guide, arts & crafts teacher, baseball pitcher and the list goes on. More than one grandkid took advantage of her runaway shelter when they felt like it. She was their biggest fan and followed all of their events whenever possible. Kay enjoyed the role of storyteller with her grandkids as she shared stories of her life and of her family as the grandkids soaked it all in.

2005 was a tough year for Kay as her beloved mother passed away in January only to lose her life partner, Bob, the following December. Kay remained strong and kept the family bond strong as well for the rest of her years. She continued to do all the things she enjoyed and Kay leaves behind family and friends that loved her to no end. Those bonds and friendships are what kept her last few months as happy and as positive as they could possibly be. Kay appreciated the people in her life that made this possible. Kay believed in “work hard, play hard” and in that regard she led a very rich, full and blessed life.

Memorial funds to the family will be donated to varying community organizations that Kay supported through the years.

Viewing will be at Hutchins Funeral Home in Franklin NE. on Tuesday and Wednesday,, July 11 and 12, 2018 from 9:00 a.m. to 5:00 p.m. Rosary and vigil will be held on Wednesday July 11 at 7pm at St. Katharine Drexel Catholic Church, Franklin. Funeral services will be held Thursday, July 12 at 2pm also at St. Katharine Drexel Catholic Church, Franklin. Luncheon will be served at the Franklin Senior Center following the funeral services. Inurnment will be a later date in the Greenwood Cemetery, Franklin, Nebraska. Hutchins Funeral Home, Franklin, Nebraska, was in charge of arrangements.

To order memorial trees or send flowers to the family in memory of Kathryn Christiancy, please visit our flower store.