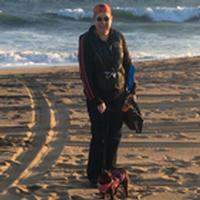 Kathleen Ann (Rhamy) Jameson, of Franklin, Nebraska, was born on June 12, 1959 on an Air Force Base in Massachusetts. She died after a battle with cancer, at her home, on April 4, 2017.

As a child, she traveled all over the world following her father in the Air Force. She attended school at Gibbon, Nebraska where her family settled down to raise a family. She married Tommy Jameson on August 8, 1998 in Naponee, NE.

Kathleen enjoyed riding on their motorcycle and traveling all over the United States with her husband and friends. She would take her therapy dog everywhere with her and would get lots of attention. Her therapy dog also had the opportunity to go into hospitals to meet with the patients to cheer them up. This was something Kathy enjoyed as she loved talking with people around her. She was the kindest and sweetest lady who was a friend to everyone she met. Every time she made it to town, she would be sure to visit Goodwill as this was always her favorite store to get a good bargain. In the spring and summer, she would be found outside planting flowers in her garden and just spending time in the sunshine! Her favorite hobby was taking pictures, especially of animals, which she became an expert at. Kathy's grandchildren were very special to her as she cherished every moment she got to spend with them.

She was preceded in death by her father, Fred Rhamy Sr. and daughter, Makima Jo Qualls.

A celebration of life service will be (was) Friday, April 7, 2017 at 2:00 p.m., at the Crossgate Community Church, Franklin, Nebraska with Pastor Kasey Loschen officiating. Music that was played for the service was - "I Hope You Dance" by LeeAnn Womack, "If I Had Only Known" By Reba McEntire, and "Finally Home" by Mercy Me. Casket bearers will be (were) - John Kegley, Keith Meints, Randall Jameson, David Davenport, Rob Glassmyer, and Kent Reynolds. Honorary Casket bearers were: Jacob Rhamy, Conner Rhamy, Lucas Rhamy, Darven Haynes, Hailey Rhamy, Austin Dierking, and Trevor Dierking. Interment followed the service in the Naponee Cemetery, Naponee, Nebraska. The family suggests memorials to help with expenses. Visitation will be (was) Thursday, April 6, 2017 from 9:00 a.m. to 7:00 p.m., with the family present to receive friends from 5:00 p.m. to 7:00 p.m. at the funeral home. Online condolences can be left at www.hutchinsfh.com . Hutchins Funeral Home, 1402 M. Street, Franklin, Nebraska was in charge of arrangements.

To order memorial trees or send flowers to the family in memory of Kathleen Jameson, please visit our flower store.