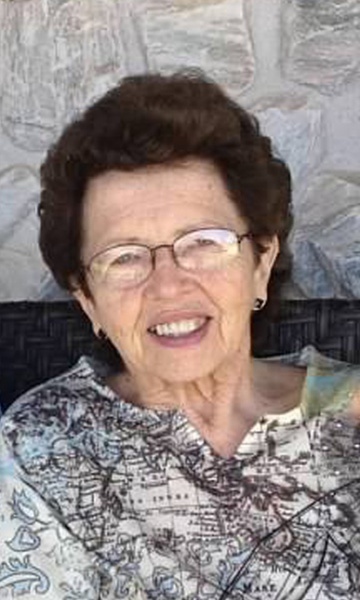 JOIN US THIS SATURDAY, 10:00 AM AT THE BLACK POWERD RESTAURAUNT FOR A CELBRATION OF JOYCE A. PEDERSEN'S LIFE AND A LUNCHEON AND DESSERTS FOLLOWING THE CELEBRATION. ALL ARE INVITED TO JOIN THE FAMILY

Joyce Arlene Pedersen, 89, of rural Bloomington, Nebraska passed away on Tuesday, March 14, at Arbor Care Center in Franklin, Nebraska, with loved ones by her side.

A celebration of life will be held on Saturday, April 9th at 10:00 A.M. at the old Black Powder restaurant in Franklin, NE with lunch following. A committal service will follow at 1:30pm at the Riverton cemetery.

Joyce had a very happy childhood with fond memories of visiting her father’s barbershop, helping her mother, who was a teacher, bake for neighbors and boarders, and spending time with her extended family. She shared great memories of picnics and outings along Thompson Creek near their home.

Joyce graduated from Riverton High School with the class of 1950. She married Norris Pedersen in the same year and to this union two children were born: Bonnie and Gary.

She and Norris raised their family in the rural areas of Riverton, Campbell and Franklin, Nebraska. After moving to a farm near Franklin in 1957 she started working at Gartin’s Grocery in Franklin and later purchased the Frosty Mug Drive In which she managed for nearly 30 years. Being the great cook that she was, many remember her homemade special dinners added to the menu each day and her grandkids remember lots of delicious ice cream.

Joyce loved Nebraska sports, especially football and volleyball. She enjoyed taking her family to several out of state games, and shared so many great memories with her son, Gary and family, as they would attend games in Lincoln. She would pack a lunch with lots of goodies and off they would go!

She also loved playing cards and traveling with friends to more than eighty different countries. Joyce was delighted to be able to accompany Gary and his family on several volunteer trips to countries outside of the US where they provided eye care to those in need. Joyce was always up for her next adventure. She also enjoyed her many collectibles, especially her dolls, villages, and souvenirs found throughout her home, which she happily  lived in for nearly 50 years.

In lieu of flowers memorials are suggested to the family for later designation.  Hutchins Funeral Home of Franklin is in charge of arrangements.

To order memorial trees or send flowers to the family in memory of Joyce Pedersen, please visit our flower store.