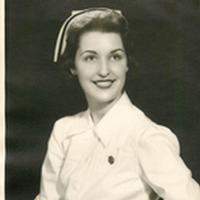 Joyce Kathleen Eisenhauer of Omaha, Nebraska, was born November 10th, 1936, to John and Helen (Smithson) Paulsen of Franklin, Nebraska. She died suddenly at her home on Tuesday, October 31, 2017, at the age of 80 years, 11 months, and 21 days.
Joyce attended Franklin High School, graduating with the class of 1954. After high school, she attended Bethany Hospital School of Nursing in Kansas City graduating in 1957. She returned to work at Franklin Memorial Hospital from 1957 to 1962.
During this time she met Paul L. Eisenhauer, a coach, and teacher at Franklin High School. They were married April 10, 1959. They moved to Omaha in 1962, where Joyce worked at Clarkson Hospital for 35 years. First, on the Cancer Floor, she worked in patient care, and she moved up to supervisor on the floor. After 20 years on the cancer floor, she moved to other floors and finished her nursing career in outpatient care. One of her greatest attributes, was her hard work while on the job and at home. She would come home many times saying, "I ran my legs off today," says Paul.
Joyce was preceded in death by her parents - John and Helen Paulsen; brothers - Robert, John, and Ronald Paulsen; and a beloved sister - Margaret Ann "Peggy" Bell.
To mourn her passing, her husband - Paul L. Eisenhauer of Omaha, Nebraska; son - Steven and wife, Kellie Eisenhauer of Omaha, Nebraska; daughter - Deidra and husband, Steven Crouse of Eureka, Missouri; granddaughters - Tara and husband, Adam Wilson, Katelyn Eisenhauer and David Torres, Mallory Eisenhauer and David Wagner, all of Omaha, Nebraska; grandson - Joseph Crouse of Eureka, Missouri; two great-grandsons - Nathan and Jackson Wilson of Omaha, Nebraska; sister - Glenda and husband, Kenny Hunt from Oregon; two brothers - Tom and wife, Betty Paulsen, of Franklin, Nebraska, and Rich and Peri Paulsen, of Stromsburg, Nebraska; numerous nieces, nephews, other family and friends.
She loved her family, friends, children and grandchildren, who knew her as Nana.
Visitation for Joyce Kathleen Eisenhauer will be Sunday, November 5, 2017, from 1:00 p.m. to 5:00 p.m. at the Hutchins Funeral Home, Franklin, Nebraska, and the family will receive friends from 9:00 a.m. to 10:00 a.m., Monday, November 6, 2017, at the Hutchins Funeral Home. Graveside service will be Monday, November 6, 2017, at 10:30 a.m., at the Greenwood Cemetery, Franklin, Nebraska, with Pastor Phil Sloat officiating. Interment will follow in the cemetery. The family suggests memorials to: Franklin County Community Foundation Eisenhauer Scholarship.
Hutchins Funeral Home, Franklin, Nebraska, was in charge of arrangements. Online condolences can be left at www.hutchinsfh.com.

To order memorial trees or send flowers to the family in memory of Joyce Eisenhauer, please visit our flower store.