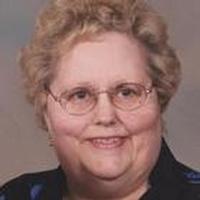 
She was born on November 7, 1939 to Friend Valentine Hadley and Augusta Louise Rebman Hadley in Smith County, KS. She attended grade school at Sindt Country School. Joyce attended Naponee Public School and then graduated from Naponee High School in Naponee, Nebraska. For many years Joyce worked as a nurse aid. Joyce was united in married to Francis Crouse. To this union five children were born, Michael, Curtis, Cindy, Bryan and Randall.

Francis passed away and later on Joyce was united in marriage to Edward L. Albers and they lived in Franklin.


She was a member of Grace Lutheran Church in Franklin and the Paul Hartt American Legion Post #145 Auxiliary in Bloomington.


A celebration of life service for Joyce Elaine Crouse Albers will be held on Tuesday, July 1, 2014, 1:00 pm at the Grace Lutheran Church in Franklin Nebraska, with Rev.Ron Kuehner officiating. Burial will take place in the Maple Grove Cemetery in Bloomington, Nebraska. Visitation will be held Monday, June 30, 2014 9:00 am - 7:00 pm at Hutchins Funeral Home, Franklin, Nebraska Memorials are suggested to the family for later designation. Online condolences can be given at www.hutchinsfh.com.Hutchins Funeral Home of Franklin, Nebraska, in charge of arrangements.

To order memorial trees or send flowers to the family in memory of Joyce Crouse-Albers, please visit our flower store.