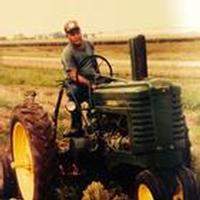 John was baptized into the Zion Lutheran Church in 1953, comfirmed in 1967, and graduated from Franklin High School in 1972. John contuned his membership at Zion Lutheran Church of Macon, Nebraska, where he was an active member. He was also active in the Macon Lions Club.

He farmed until 2008. After that John worked with Rhn and Peder Jacobsen, and Moore Brothers.

John was preceded in death by his parents - Albert H. and LaVonda.

He is survived by his children - Stacy and husband, Brian Neubauer of Alma, Nebraska, Cari and husband, Zack Emerson of Wymore, Nebraska, and Ashley and husband Mark LaBrune of Sioux City, Iowa; seven grandchildren that he loved much - Drew and Halee Jo Neubauer, Marlee and Piper Emerson and Kaden, Ella and Sean LaBrune; brother - LaVon Tobiassen of Hildreth, Nebraska; and a host of other relatives and friends.

To order memorial trees or send flowers to the family in memory of Johnie Tobiassen, please visit our flower store.