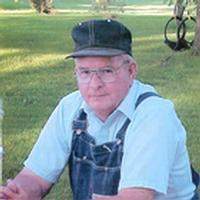 John Arthur Rubendall of Franklin, NE went to be with our Lord on Sept 2nd, 2016 at the age of 86. John was born January 15th, 1930 to Earl Edwin and Edna Pearl (Dean) Rubendall at their rural farm in Decatur County Kansas. He attended school in Norcatur, Kansas, and graduated high school in 1948. Upon graduating John farmed with his dad until joining the Navy in 1951. He served in the Navy four years, serving basic training at Great Lakes Naval training center in Chicago, Illinois. Following basic training he was sent to San Francisco, where he boarded the destroyer USS Brown. There John served as a gun mate 3rd class during the Korean Conflict.

John was joined in marriage to Mary Ella Stephens on Feb. 23, 1954. To this union four children were born, Julie Dianne, Janice Faye, Barry Earl, and Lori Eileen. John and Mary made their home in Norcatur Kansas, where John farmed with his dad, was a volunteer fireman, served on the City Council, School Board, School bus driver and substitute mail carrier.

John and Mary left the farm in 1972 moving to Franklin, Nebraska, where they owned and operated a Western Auto Store and later Rubendall Plumbing. John attended North Central Vo-Tech in Beloit, Kansas where he studied heavy equipment operation. This led him to working for Franklin County Road Dept where he worked until his retirement.

John was always quick to tell a joke and he didn't know a stranger, Where ever he went he ran into someone he knew or struck up a conversation with someone he met. He enjoyed playing his guitar, taking his family camping and endured many rock hunting ventures.

Leaving behind his beloved wife Mary of Franklin Nebraska, four children, Julie and Ted Brockish of Bain Bridge Island WA, Jan Beck of Liberty Kansas, Barry and Cindy Rubendall of Franklin, Nebraska, and Lori and Rick Lindsay of Norton Kansas. Eight grand kids, Jessica, Lindsey, Liberty, Mary Ruth, Garrett, Whitney, Zachary and Jedediah. Eight great-grandkids, Sonny, Isaiah, Lilliana, Sophia, Henry, Esme, Olivia and Liam, many other family members and friends.
When you think about John please remember him with a smile on his face, a story or joke to tell and always a song in his heart. He will be missed and loved always.

Online condolences can be left at - www.hutchinsfh.com. Hutchins Funeral Home, Franklin, Nebraska was in charge of arrangements.

To order memorial trees or send flowers to the family in memory of John Rubendall, please visit our flower store.