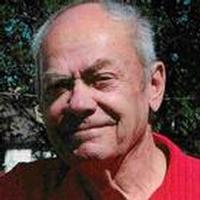 Jerry Lee Moulton, Sr. of Frankllin left this world October 5, 2014 at the age of 78 years 8 months and 5 days while at Mary Lanning hospital in Hastings. Jerry was born on January 30, 1936, in Flint, Michican, to Thomas Moulton and Florence Hadley. He was the eldest of 5 children. While in high school Jerry joined the Air Force. On June 7th, 1958 Jerry was united in marriage to Elaine Zoucha in Columbus NE. After being discharged from the Air Force, Jerry moved his family to Alma, where he worked for Pruesch Electric, Modern Kitchens and the Colonial Villa until moving to Hastings. From this union came 4 children, Tom, Jerry, Tammy, and Debbie, with 12 grandchildren, 11 great grandchildren, and 3 more to be born in early 2015.
Jerry met Wilburta "Burt" Cooley in 1980. The two were inseperatble until his passing October 5, 2014, at the age of 78 years, 8 months and 5 days while at Marry Lanning Hospital. Burt brought to this union 5 children, Jaci, Teddi, Jack, Tony and Lance, they all considered him their dad too. From this family there are 10 grandchildren, 13 great grandchildren and 1 great great grandchild.
When Jerry was a young man, he loved to play fast pitch softball. Jerry loved helping his sons learn the game of baseball. He also loved to fish and camp at the Harlan County Lake. Later in life, Jerry learned how to draw. He started designing and making all sorts of items from wood. Jerry really loved making and selling his art work at many flea markets. Jerry worked at YRTC in Kearney for many years until he retired.
Jerry was preceded in death by his parents, 2 brothers, and 2 sisters. He leaves to mourn his passing Burt of Franklin, his children, Tom Moulton and wife Jacquie of Alma, Jerry Moulton JR and his wife Sheryl of Holdrege, Tammy Dow and her husband Tom Hays Center and Debbie Meade and her husband Terry of Macon; and all of his grandchildren, great grandchildren and friends.
Celebration of life service for Jerry L. Moulton, Sr. will be (was) Friday, October 10, 2014, at 10:30 a.m., at the Hutchins Funeral Home, Franklin, Nebraska, with Pastor Kasey Louschen officiating. Interment will be (was) Friday, October 10, 2014, at 3:00 p.m., at Fort McPherson National Cemetery, Maxwell, Nebraska, with military rites by Offut Air Force Honor Guard. The family suggests memorials to Jerry L. Moulton Memorial fund to help with expenses.

To order memorial trees or send flowers to the family in memory of Jerry Mouton, Sr., please visit our flower store.